U.S. Rep. Kendrick B. Meek a 1989 FAMU graduate has been elected Chairman of the Congressional Black Caucus Foundation ( CBC Foundation). Congressman Meek, who is serving his second term in the U.S. House of Representative, was first elected to public office at the age of 27.

Congressman Meek serves on the House Armed Services Committee, which oversees the largest agency budget in Congress. He also serves on the House Committee on Homeland Security, where he is the Ranking Member on the Subcommittee on Management, Integration and Oversight. This subcommittee has jurisdiction over the administration and operation of the Department of Homeland Security's airport and seaport security programs; customs operations; assistance to state and local governments, and first responders; and immigration inspections, detention and enforcement policies and procedures. Meek is one of the youngest Ranking Members of any committee in the 109th Congress.

While at FAMU, Rep. Meek played defensive end for the Rattler football team. He is a proud member of Omega Psi Phi Fraternity.
Posted by da rattler at 3:15 PM 3 comments:

Howard University's doctor of pharmacy program has been put on probation by the national accrediting agency, leaving some students worried about whether their educations are at risk.

"It does not mean we're not accredited," said Interim Dean Beatrice Adderley-Kelly, who met with School of Pharmacy students Friday to reassure them that their degrees are not in jeopardy. "We are in probationary status, and we're taking steps to make sure that it's removed."

The pharmacy school is accredited through the end of the 2006-07 academic year by the Accreditation Council for Pharmacy Education, the independent agency that evaluates such programs to ensure quality and standards.

School officials had been working to solve issues raised by the council but learned this month that they had not done enough.

If the school fails to comply, then the accreditation could be yanked.

One of the agency's major concerns "had to do with our space needs," including classroom areas, Adderley-Kelly said. "Increasing enrollment has affected our space."

The school operates out of a four-story building constructed on the main campus in Washington in the mid-1950s and in an annex next door, according to the school's Web site.

Since 2002, four of the 25 medical residency programs at Howard's hospital have lost accreditation, including emergency medicine and pediatrics, and three others were voluntarily withdrawn from accreditation by the university.

Several of the residency programs, which provide specialized training after medical school for new doctors, continue to operate on qualified status.

The School of Pharmacy, which offers professional and graduate degree programs, is part of Howard's early history: The first student to graduate from the university, in 1870, received a doctor of pharmacy degree.
Posted by da rattler at 11:13 AM 1 comment:

Allen University, in Columbia, SC, has dropped its football program. In fact the schools board of trustees decided to cancell all sports for atleast five years.

The school no longer could afford the program’s cost, Allen University president Charles Young said. The school had been spending $1.4 million a year on the program, an Allen official said. “That’s a lot of money for a school with about 600 students. For half a million dollars, I could do so much,” Young said, nodding toward mock-ups of three new dormitories and a new cafeteria. The four buildings will cost $8 million and are a part of the university’s five-year master plan.

“School spirit comes from football. If they won’t come back for anything else, (the alumni) show up for football games,” said William Jefferson, director of alumni affairs and head of the alumni association’s 1,000 Plus Club, which contributed $40,000 a year toward the cost of the program. But those dollars and love were not enough to finance a football team.

The decision to cut the program had little to do with football and a lot to do with money, president Young said. Allen now can focus more time and money on courting students who dream of careers in math, science, business and the humanities, Young said. “The National Football League does not come here to recruit,” he said. “But the FBI, BellSouth, Merrill-Lynch and other corporations are coming here to recruit Allen University students. So we need to focus on what we do well.”
Posted by da rattler at 6:30 PM No comments: 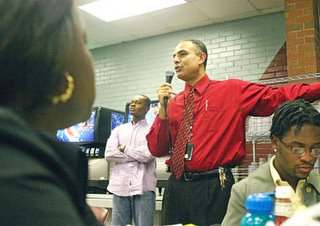 About 100 North Carolina Central U. students staged a sit-in to protest the cafeteria food Feb. 15 and successfully demanded an audience with management.

Students said the food was of poor quality. They also complained about what they called inadequate customer service and unsanitary conditions in NCCU's W.G. Pearson Cafeteria.

Agu Onuma, vice president of the Student Government Association, said "the quality of food and efficiency of staff has been an injustice to students. Service should be better."

When the students met with Lawrence Lisborg, cafeteria general manager, they raised concerns about the cafeteria's lack of variety, food quality and sanitation.

On Dec. 12, Durham Health Department inspectors gave the cafeteria a score of 90 percent, an A minus.

The department randomly inspects restaurants and school cafeterias four times a year. The highest possible score is 101. If a score drops below 70 percent, the facility can be closed.

"A 90 isn't bad. It's an A," said Marvin Hobbs, an environmental health specialist with the Durham County Health Department.

"Black people suffer greatly from heart disease and stroke," said Portia Woodson, a sophomore in nursing. "Why are we served burgers and french fries every day, instead of healthier alternatives?"

Onuma, the front man of the cafeteria sit-in, said if conditions did not change, the SGA senate would organize a cafeteria boycott.

He said he was using the sit-in as a platform to begin protesting other issues on campus. "Change starts at home," he said
Posted by da rattler at 6:01 PM No comments: 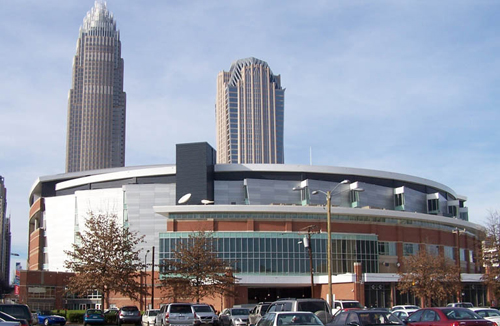 In in first year in Charlotte, the 61st CIAA basketball tournament has sold out. The tournament will take place at the Charlotte Bobcats Arena.

"There are no more tickets," Commissioner Leon Kerry said.

With the tournament,which begins Monday, is in Charlotte for the first time and demand for the tickets has been high.

The tournament spent six years in Raleigh at the RBC Center and attendance there increased every year, according to Kerry.

Long one of the most popular Division II basketball tournments, the CIAA event has produced a financial windfall for its 12 member schools. "Because of more corporate money, with the move to Charlotte, each school will get more general-scholarship money," Kerry said. "And that's something we are excited about it."

He estimated that close to $1 million will be divided among the schools.

Schools unhappy with their ticket allotment

As in past years, each member school was alloted just 700 ticket books to sell.

"I just think all of the member institutions should have anywhere from 1,000 to 2,000 tickets available to sell at each school," Caldwell said. "You could be given a date by which you had to sell those tickets, and if you don't sell them give them back to the CIAA office and they would sell them."

Kerry estimated that at least 51 percent of the tickets sold out of the CIAA office in Hampton, Va., went to people who aren't alumni of any of the current 12 schools.

"That has been the case for a long time," he said. "We've got alums from A&T, Hampton, and Norfolk who keep coming to the tournament year after year. And they keep buying tickets."
Posted by da rattler at 6:55 AM No comments:

North Carolina Central University (NCCU) Chancellor James H. Ammons will stike out on a 11-city tour, beginning March 11, 2006, to meet students, parents, business executives and alumni throughout the state as he works to build enrollment, donor and corporate support.

“This tour will give us the opportunity to tell our story to people across North Carolina and help us to continue to grow the university and recruit some of the state’s best and brightest students,” said Ammons.

The tour will take Ammons and a team of administrators, recruitment advisors, and students through Durham, Raleigh, Charlotte, Asheville, Statesville, Salisbury, High Point, Fayetteville, Wilson, Roanoke Rapids and Henderson. Ammons also will visit the homes of several high school seniors who have been offered full scholarships to NCCU for fall 2007.

“This is an excellent opportunity for me to personally meet students and tell them why they should attend North Carolina Central University,” said Ammons. “North Carolina is a very competitive market in terms of choice for higher education and I want students, parents and supporters to understand that NCCU has something very unique to offer.”
Posted by da rattler at 11:27 AM No comments:

Through a U.S. Agency for International Development’s Africa Education Initiative SC State University and other HBCUs are working to provide textbooks and other learning marterials to students in grades K-8 in six sub-Saharan African countries.

SCSU will receive $3 million in federal funds and will provide, by September 2008, a minimum of 600,000 textbooks and/or learning materials for residents of Tanzania and the island of Zanzibar.

The focus of the materials is secondary science in the areas of biology, physics and chemistry. The materials must be “relevant and culturally appropriate and sensitive,” said Andrew Hugine, President of SCSC.

SCSU has a number of faculty members from Africa, including one from Ghana, Hugine said.

The program opens up all sorts of possibilities for students, faculty and technology exchanges and helps SCSU fulfill its mission of “helping our students understand the world” by providing global perspectives, Hugine said.


Chicago State University and Ghana.
Posted by da rattler at 7:16 AM 3 comments:

Large grants from 3M to Tuskegee University are not new. Through the years, the Minnesota-based company has given the school more than $3 million.

"Our policy is when we get at least 50 percent of the funds we need, then the trustees can or may authorize construction to begin."

The new building will have classrooms, laboratories and an auditorium. Tuskegee has 434 business students.
Posted by da rattler at 10:04 AM No comments:

Endowments at HBCUs Grow at a Slower Rate than PWCs

Spelman College, with an endowment of $258,054,000, had the second-largest fund among the black institutions. For the year ending June 30, 2005, Spelman’s endowment fund was up 5.7 percent from a year earlier.

Hampton University in Virginia had endowment resources of $199 million as of June 30, 2005. Hampton’s endowment grew by 7.1 percent from the earlier year.

According to a report by the National Association of College and University Business Officers (NACUBO), the typical college endowment fund increased its value by 9 percent in the period from July 1, 2004 to June 30, 2005.

The largest college and university endowment funds tended to perform better than smaller funds. Among these large funds Stanford posted the most impressive gain of 23 percent. Harvard University, with the nation’s largest endowment of $25.5 billion, enjoyed a 15 percent increase.
Posted by da rattler at 8:43 AM No comments:

The university announced the gift from Calvin Tyler, a retired United Parcel Service Inc. executive, and his wife, Tina. The donation is the couple's second $500,000 gift to Morgan State. They made the first donation in 2000.

"We are natives of Baltimore and products of the Baltimore City public schools," Calvin Tyler said in a statement. "We have been truly blessed throughout our lives and so we just want to look for opportunities to help others."

Morgan State's president, Earl Richardson, in a statement praised the Tylers for demonstrating "an unyielding commitment to Morgan's mission and a devotion to improving the lives of young people."

So far, five students have received a four-year scholarship to Morgan as a result of the Tylers' original gift.
Posted by da rattler at 10:07 AM No comments:

TMSF, named for the late U.S. Supreme Court associate justice, is the only national organization of its type that provides merit-based scholarship and programmatic support to students attending the nation’s public HBCUs. It also provides capacity building support to its 47 member schools.

Since its inception in 1987, the fund has awarded more than $50 million in scholarships and other support enabling more than 5,000 students to attend public HBCUs.
Posted by da rattler at 9:47 AM No comments: