Growth is the order of the day at Albany State 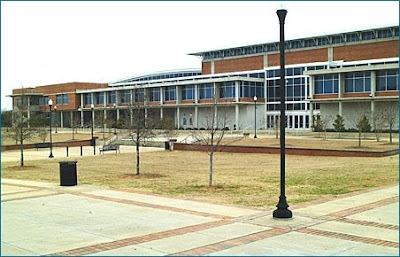 Albany State University Vice-President for Fiscal Affairs Larry Wakefieldwas beamed with pride as he talked about the schools record enrollment in an address at the Albany Rotary Club.

“We’re seventh in the state among Georgia schools in retention rates and eighth out of 35 in six-year graduation rates,” Wakefield told the gathered Rotarians. “We’re quite proud of that.”

Wakefield then went into detail about the progress being made on Albany State’s master plan for expansion.

“Our new student center should open next year,” Wakefield said. “The building costs $15.8 million and will add 60,000 square feet to our dining hall.

“We recently broke ground on two new residence halls. The buildings will add 600 new beds and will be for freshmen and the other for upper classmen. The building should open by August of next year and cost $23 million.”

“The beauty is this is all state money,” Wakefield said. “We have $28.7 million budgeted for the building and another $1.8 million for design.”

Wakefield said that eventually all the buildings located in the lower campus’ flood plane will be replaced by new buildings on the upper campus, then razed, leaving the lower campus as an expansive greenspace.
Posted by da rattler at 7:00 PM 6 comments: 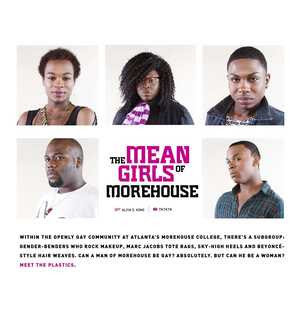 The October issue of VIBE Magazine, which hit newsstands October 12th), takes a look at the dress code put in place at Morehouse College targeted at the small group of active and vocal cross dressers at the traditionally all-male Black college.

Not surprisingly, the article has drawn record-breaking traffic online at Mean Girls Morehouse.

In an email sent to all Morehouse students and alumni, Morehouse College President Robert Franklin stated, "As president of this institution, as a Morehouse graduate and as a father, I am insulted by what is to be published. Addressing our young men as “girls” is deeply disturbing to me, no matter what the remainder of the article may say. Morehouse has for 140 years developed men—men who are equipped to live and contribute to an increasingly diverse, global and complex world."

The VIBE article takes a look at the ever-present tensions on the Morehouse campus between the school’s hyper-masculine attitude and its gay students. Writer Aliya S. King profiles several current and former Morehouse students whose flamboyant gay tastes pose an affront to the campus of 3,000 students. The article—provocatively titled “Mean Girls of Morehouse”—is based on the apparently self-titled group of gays known as the Plastics and some of the same ones targeted by the school last year with its “Appropriate Attire Policy.”

The school’s lack of tolerance came under fire after a gay-bashing in 2002 and again in 2006 when allegations of an anti-gay firing surfaced.
Posted by da rattler at 7:30 AM 14 comments:

Wheeler Brown, the athletic director at North Carolina A&T University has been fired, today, following the death of a student during an unsanctioned track tryout.

Brown, an A&T graduate and former football player, first came to the campus in 2002 as the department’s associate athletics director for internal affairs and compliance. He served as interim AD from November, 2007 until being named permanent AD in August, 2008.

An autopsy released Thursday showed that 20-year-old Jospin Milandu died as a result of complications from sickle-cell disease. Milandu was one of 29 students at a A&T track tryout who had not been given a physical, an NCAA violation. A newly designed mandatory screening test which all Division I college athletes began undergoing this fall would likely have revealed the sickle-cell trait, which can lead to sudden death during strenuous exercise.

An athletic trainer was absent during the, Aug. 19 tryouts, which is against school policy. It was 82 degrees and cloudy, on the day the tryout were held the autopsy said.

Deborah Calloway, will take over Brown's duties until another athletic director is named.
Posted by da rattler at 6:23 PM 7 comments:

Tuskegee gets grant to help new farmers and ranchers 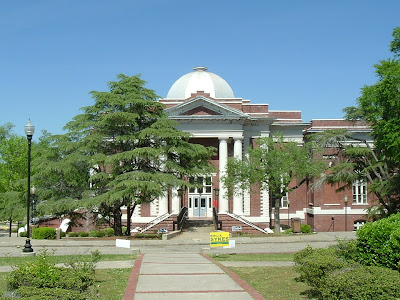 The U.S. Department of Agriculture’s (USDA) National Institute of Food and Agriculture has awarded $675,750 to Tuskegee University as part of the Beginning Farmer and Rancher Development Program.

Nationwide, the number of new farmers and ranchers is increasing.

Many of these new farmers lack the years of experience held by most farm operators. To close this gap, the USDA’s Beginning Farmer and Rancher Program at Tuskegee University provides education, mentoring, and assistance to these beginning farmers and ranchers.
Posted by da rattler at 9:55 AM 5 comments: