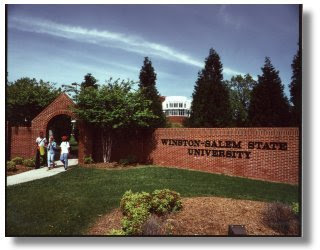 The new chancellor at Winston-Salem State University, Donald Reaves, is right to make raising graduation and retention rates his top priority. Low rates in those areas have been a problem at the school for too long.

Good graduation and retention rates “are the primary reason we’re here,” Reaves rightly said. “In the end, that is the measure of your success.”

Raising those rates won’t be easy. This is a complex problem. Reaves obviously realizes that, and has some good ideas for raising the rates. He wants to make sure there are enough classes and in the right sequence for students to graduate on time. He also wants to hire staff to advise students (faculty does that now) and raise admission standards.

N.C. A&T State University in Greensboro raised those standards this week. At WSSU, Reaves wants to raise the median GPA required for admission to 2.6 and the median SAT score to 800 next year. The medians in those are now 2.5 for GPA and 780 for SATs.

All in all, Reaves is tackling the problem of graduation rates realistically and honestly.

“I think we do a real disservice when students are not prepared,” Reaves said in regard to admissions. “And I think we will do a better job … if we guide them into the institutions that are designed to prepare them, such as the community colleges.

“And that’s a hard pill for some people to swallow, but, in the end, I think they have a far greater chance to succeed.”

When you keep more students, Reaves correctly noted, “you don’t have to recruit as hard year-in and year-out.”

Other factors also figure in the number of students dropping out. There are financial strains, and huge pressures to succeed, especially for freshmen from inferior schools competing against those from better schools. It’s no wonder that many students drop put. But with hard work, the problem can be curbed.

Measures to raise graduation rates such as hiring staff to help students will take money. Academic programs, in general, are expensive. Reaves, like any college president, has to be a good fundraiser. He’s leading by example. He and his wife, Deborah, have pledged $100,000 to WSSU.

Reaves, who was the chief financial officer at the University of Chicago before coming to WSSU, obviously believes in his new school. He has good reason to. His predecessor, Harold Martin, greatly enhanced WSSU.

But like any good college, WSSU is a work in progress that must constantly be led to greater heights. At WSSU, a big part of that journey has to be raising graduation rates.
Posted by da rattler at 12:55 AM 5 comments: 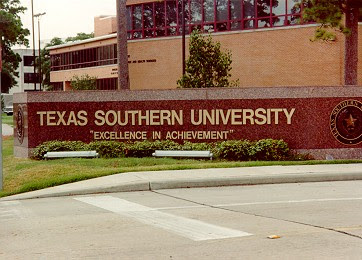 Texas Southern University is proposing top-to-bottom changes to ease the concerns of state lawmakers, including greater oversight from regents, tighter controls over spending and the involvement of outsiders in academic and financial matters.

The sweeping set of reforms comes after nearly two years of turmoil at Texas' largest historically black university and could lead to an infusion of money from the state.

While the additional funding is an immediate and critical need, campus leaders characterized the proposed strategy as the best chance for improving a school with myriad of problems, including declining enrollment and low graduation rates.

The long-range plan calls for new policies that would require the governing board to be more involved than before, especially in money matters. At the same time, it says the regents' first priority should be to hire a permanent president.

The 167-page blueprint draws from ideas proposed by Gov. Rick Perry's TSU advisory committee, which offered a stinging assessment of the university in March. In following the committee's report, the new plan suggests a renewed focus on undergraduate education while making no mention of earlier research ambitions.

If the plan is approved, the state would provide nearly $40 million in supplemental funding over the next two years.

Focus on management
The roadmap focuses mainly on the university's management, recommending a series of tighter controls, including several continuous, scheduled reports and audits to the board. Regents, for example, would receive an annual plan to maximize the amount of financial aid available to students before setting tuition rates.
The goal is to provide more information in the decision-making process to the board, which came under heavy criticism for lax oversight amid the spending scandal that led to the firing of President Priscilla Slade in 2006.

Glenn Lewis, board chairman since May, said the regents' workload would increase, but their "primary responsibility is having an administrative team in place that we can trust and rely upon." A new TSU president could be hired as soon as January.

The reorganization plan calls for a balanced budget and an end to the use of special funding for ongoing operation costs. It also identifies nearly $140 million in possible one-time expenses over the next eight years, including the demolition of shuttered buildings and repayment of financial aid to the U.S. Department of Education, among other unpaid bills.

Shooting for success
On the academic side, TSU would use improved tests to assess the college readiness of applicants and strengthen advising and counseling programs to design "a plan for success" for each student. The university would advise students seeking job skills rather than a bachelor's degree to enroll elsewhere.

TSU, however, would not introduce entrance requirements, and doing so would be a fundamental change from its long-standing commitment to accept anyone who wants to pursue higher education, Lewis said.

Still, the university may ease out of the costly remedial education business, possibly transferring responsibility for improving basic math and English skills of its students to Houston Community College, according to the reorganization plan.

TSU estimates that roughly 70 percent of first-time freshmen arrive on campus without the skills needed to do university-level work. More than half do not make it to their sophomore year.

The university's enrollment plunged to its lowest point in five years with 9,544 students this fall. Although campus leaders are hopeful the numbers will stabilize next year, there is concern over a new state law that requires some students who do not complete specified high school coursework to attend a community college.

"The community college pipeline will be the wave of our future," she said.
Posted by da rattler at 5:54 AM 4 comments:

Lincoln University to break ground on $40.5 million on science building 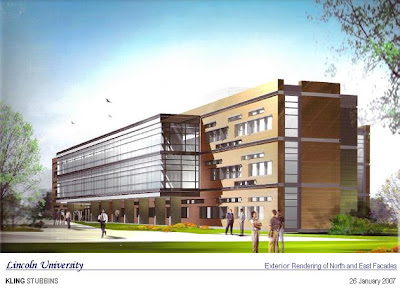 Lincoln University will hold a groundbreaking ceremony for construction of a new Science/General Classroom High Technology Building on November 17 at noon on the southeast section of the campus, site of the proposed structure.

The building will cost $40.5 million, including design, construction, furniture, fixture and equipment, and will house the biology, chemistry, physics and mathematics and computer science departments.

“We are excited about the construction of the building and what it means to our students,” President Ivory Nelson said. “It is in essence another step forward in our efforts toward achieving excellence.”

With its brick and glass exterior, the four-story building will feature six laboratories each for the chemistry and biology departments. Also of note are 100 and 60-seat lecture rooms on the first floor.

Construction of the building no doubt will enhance Lincoln University’s new academic initiatives, particularly its Center of Excellence in the Sciences. An outgrowth of that initiative would be the increase of minorities pursuing advanced degrees in the sciences, thereby increasing significantly the number of underrepresented researchers.

“The new building has many implications for the future of our students,” President Nelson said.
Posted by da rattler at 1:00 AM 3 comments: 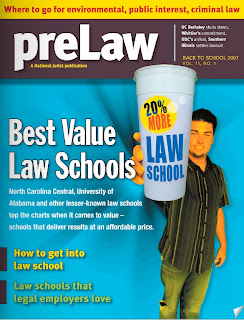 PreLaw Magazine has named the North Carolina Central School of Law as one of the nation's "best values" in law.

NCCU and law schools throughout the nation were judged on such criteria as tuition costs, bar passage rate and the employability of graduates. The NCCU School of Law was ranked # 1, edging out the University of Alabama School of Law (# 2) and Georgia State University College of Law (# 4).

NCCU’s bar passage rate at 86 percent in 2006 compared with the overall state ratings of 71 percent. The faculty-to-student ratio at the law school is about one professor for every 21 students according to statistics gathered in January of this year.

“People like our graduates,” says Pierce. “The word is out and within nine months of graduation, about 88 percent of our young attorneys have jobs.”
Posted by da rattler at 8:16 PM 3 comments: