Broadnax to retire from CAU 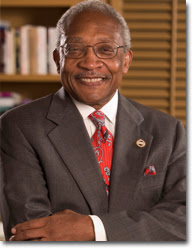 Walter Broadnax, who has led financially strapped Clark Atlanta University for six years, will retire in July, university officials confirmed today. He announced his retirement at the annual Board of Trustees meeting.

Broadnax arrived at an institution in crisis in 2002 and immediately began making changes to try to get the school out of debt. He slashed staff and cut programs, and faced off against some faculty who opposed the changes.

At the time, Broadnax said he was trying to avoid a situation like that of Morris Brown College, another Atlanta University Center institution that lost its accreditation. During Broadnax's tenure, the school was re-accredited by the Southern Association of Colleges and Schools and got out of the red.

He replaced retiring president Thomas Cole, and was only the second person to lead Clark Atlanta in the nearly two decades since the merger of Clark College and Atlanta University.

Broadnax's time at the helm was marked by controversy as well as milestones. Many of his faculty members repeatedly called for his ouster. This fall, the university again implemented hiring freezes after fewer students than expected enrolled at the school.

Broadnax said in a statement that he was sad to leave.

"These past six years have been very rewarding for my wife Angel and me, and we will miss the students and the special contact we have had with the many extraordinary people in the CAU family," Broadnax said. "While it is difficult to leave this wonderful job at CAU, I am ready for the new and exciting opportunities that come with retirement."
Posted by da rattler at 12:10 AM

The organization you choose to manage for the least expensive auto credit rates ought to have an advance shape that is easy to round out, with a without toll telephone number promptly open on the off chance that you have any extra inquiries. payday loans chicago

Mother - she brought forth you, yet she did as such a great deal more than that. She kissed your knee and dressed it when you smashed your bicycle. She stayed up until every minute of the night helping you write your research paper. She sat up with you and listened when you had your heart broken. auto title loans online in fresno