A&T must compete with peers 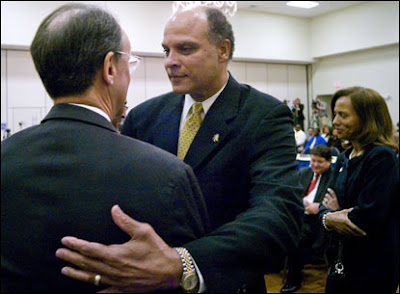 Chancellor Harold Martin gathered N.C. A&T staff and faculty together Wednesday for the beginning of what he called “a very frank discussion.”

After the crowd gave the traditional call of “Aggie Pride,” Martin asked them to take a hard look at the school of which they are so proud — and how it stacks up against its peers.

“You should always know against whom we’re competing,” Martin told the capacity crowd at Harrison Auditorium. “That’s what peers should be used for: to determine how well or how poorly we’re doing.”

Martin then presented a slide show comparing A&T to 14 peer schools approved by the UNC Board of Governors in 2006.

The schools included UNC system cohorts like ECU, UNC-Charlotte and UNCG, but also schools like the University of Massachusetts and Florida A&M University. In many ways, the comparison was not flattering.

Martin pointed out that to be considered a doctoral, research intensive university an institution should be granting a minimum of 20 doctorates each year.

In 2006-2007, the last school year for which the school had compiled complete information, A&T gave just six. That’s far fewer than the 74 granted at UNCG in the same period and well below the peer group average of 39.

The number of master’s degrees given by A&T during 2006-07 was 324, well below the group average of 891. UNCG awarded 906 master’s degrees in the same period and UNC Charlotte, also a peer institution, granted 976.

Martin said he wanted to see the school increase the number of degree programs offered, which lagged well behind the peer average for number of bachelor’s, master’s and doctorate programs.

The figures brought audible gasps from some in the audience, most of whom said they didn’t even know A&T had such a list of peers.

A&T compared better in terms of student performance, with its freshmen entering with an average grade point average of 3.11 on a 4.0 scale. That was higher than the group average of 3.0, but beneath all the other UNC systems schools on the list.

And though its 19 percent of students graduating in four years matched the peer average, A&T was well below the UNC system average of 26. It also scored below all the other UNC schools on the list.

Other areas in which Martin said he’d like to see A&T improve: faculty pay and, surprisingly for a historically black college, diversity.

“We have to make commitments in being more involved in diversity at our university,” Martin said to applause. “We must be more diverse.”

Though the crowd was shocked by many of the numbers, Martin’s suggestion that the school has untapped potential for improvement was met with furious applause. Martin said he’ll work with staff and faculty in the coming semester to improve key benchmarks and move toward putting A&T in the top 25 percent of its peer universities.

“I don’t think we have a choice,” Martin said. “I think we have to elect to compete. And I want to continue to have a conversation with you about how we do that.”
Posted by da rattler at 10:02 AM

It is huge that if the time of reimbursement is long the aggregate sum to be reimbursed will be unusually high. Ordinarily, auto advances are liable to reimbursement times of one to five years. As what an auto advance adding machine will uncover is that the sum payable every month will be higher for shorter span and less for more period. Payday Loans Chicago

For whatever length of time that you remember that financing costs for auto advances for low FICO assessments will be high, there is no reason that you can't acquire a car advance on the off chance that you have terrible credit. You can even utilize the advance as an incredible chance to enhance your FICO assessment - simply guarantee that you keep up your reimbursements and your credit will soon look greatly healthier. check cashing corona

Auctioning off your things that got you paying off debtors in any case won't not be perfect, but rather it is superior to going bankrupt. Then again think about the greater things you can offer, house, autos, and expansive machines. You can move into a littler house and if live some place with a transport framework, you can get around effectively. cash advance costa-mesa

What's more, not at all like bank advance officers, representatives just get paid when the credit closes. We get paid to close credits. Many bank officers conversely are on pay rates and have different standards other than subsidizing advances, for example, week by week meeting objectives, number of phone calls made, turned in applications, and so forth. Check Cashing Corona

You will have the capacity to get bring down financing costs too so you won't pay more cash when paying over a more extended timeframe. Contingent upon the aggregate sum of your advances, you will really have the capacity to have a reimbursement term of somewhere around ten and thirty years. payday loans san-diego