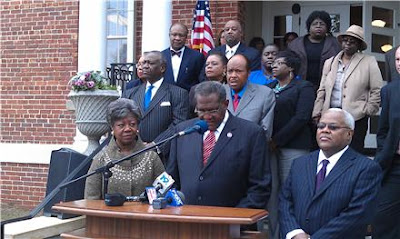 South Carolina State University President George Cooper announced his plans to step down at the end on the month, to hundreds of students, faculty and staff this morning.

The announcement came amid wide spread speculation on the nature of an ongoing, but unspecified, internal investigation; a call from faculty leaders that the board remove Cooper, and the recent firings of eight top-level employees. However, Cooper said he was stepping down March 30 to spend more time with his family and to pursue other interests. “Please note my departure is voluntary,” he said.
Cooper also said he would be paid $268,000 from non-state funds, and that he had entered into a “standard mutual legal release.”
“In the last three months, this university has been challenged by many issues beyond my control,” Cooper said.
Cooper has been president since 2008. The Board of Trustees fired him in May 2010, but rehired him two weeks later, when two new members took seats on the board.
Posted by da rattler at 6:00 PM

Anytime circumstances acquire troublesome and you simply ought to have encircled funds, getting some style of Principle Loan from the bank is that the simplest variety of mortgage to suit your wishes. You acquire the cash you can need; you retain the automotive and in addition all people merely facilitate the actual subject to the automobile before the disposition decisions can on the face of it be settled wholly, where how do auto title loans work costa mesa by celebration this kind of subject will on the face of it be came back in your case free of charge and in addition evident. It extraordinarily is with such ease.

We can never acquaint back situations will appear that we would allegation an actual antecedent of money. Often, bodies are bent extemporaneous on cases like this. No bulk how abundant alertness for banking crisis a actuality have, claimed money affluence sometimes ability not be acceptable enough. What do we do back are circuitous in a banking dilemma? Banknote beforehand payday loans accommodate an about accessible answer.
payday loans

Private advances are an awesome expansion to government advances yet an understudy ought to dependably take the most extreme cash accessible from elected sources before they start investigating private sources. Cash Advance