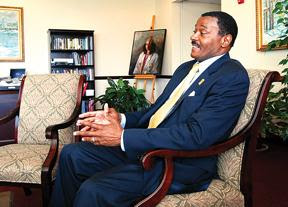 At Delaware State University, the vision of President Dr. Allen L. Sessoms and the board of trustees is clear.

“The game is to grow,” Dr. Sessoms said. “Grow dramatically.

“We are going to push ourselves out there with the finest kind of facilities we can afford because if we don’t, we can’t grow. And if we can’t grow, we’re dead.”

Dr. Sessoms’ vision and the changes it has brought about have caused some concern in the past four years among certain members of the DSU alumni, NAACP, state politicians and faculty.

The vision for growth includes a 10-year plan of nearly tripling student enrollment to 10,000, competitive athletics at the Division I level, new athletic arenas, annual research grants in the range of $100 million to $150 million, and additional doctoral and master’s degree programs.

The goal is to make DSU the school of choice in the state.

“We expect to launch this university in a major way.” said Dr. Sessoms, who is beginning his fifth year as DSU’s president.

While many cannot fault most of the goals, the fear is they will come at the expense of the university’s tradition of being a harbor for disenfranchised students.

DSU was founded in 1891 as the State College for Colored Students and has a 116-year tradition of educating the state’s black population.

Historically black colleges and universities, of which DSU is one, are institutions established before 1964 for the purpose of educating black students. Today, some have only 10 to 20 percent black population.

Dr. Sessoms said DSU will always be a historically black college, but if things don’t change, the university will be left far behind in today’s competitive market.

“So what we have decided to do is become a very different kind of institution,” he said.

“We are going to be an institution for everyone in the state.

“We are not going to be a school that caters to a certain kind of people, just African-Americans, we are going to be catering to everyone, period.

The school’s first two doctoral programs have been established and more are in the works.

Research grants have grown from $8 million to $34 million and the university’s endowment has more than doubled in the past two years, he said.

The first order of business is for $48 million to be spent for a student union center, wellness center and a strength and conditioning facility.

He also said if plans are not finalized in the next month for a Dover civic center where DSU would play its basketball games, the university will build a facility on its own.

Dr. Sessoms’ plan to grow has also touched the areas of administration.

Mr. Miller said the firing of black employees and the recent tendency of hiring white administrators and vice presidents has raised some red flags among the alumni.

Dr. Sessoms said he is simply hiring the best people for the job the university can afford and is not purposely trying to diversify the administration.

Mr. Miller said that raises concerns that while the new administrators may be perfectly capable, they might also not know the culture of DSU.

“If I’m going to go teach in a school in India, yes, I might know the mathematics, but if I don’t know the culture I’m going to have a tough time.” he said.
Posted by da rattler at 12:06 PM

Good Move! This brother has a vision!

anonymous 5:22pm - You have a point; however, the only difference is that those two groups support each other. If we keep waiting on us to support us, we are dead. Keep in mind HBCUs will NEVER lose their identity.

To buy an auto is not reasonable to each person as each individual is not conceived boundless funds. Owning a fantasy auto is not in the least a troublesome process these days. In the event that you require an auto advance as it should be possible effectively by taking an auto advance. auto title loans

Awful Credit Personal advances can be either secured or unsecured. Secured advances mean you will offer the bank some kind of insurance that they can gather in the occasion you don't pay back the advance. Car Title Loans