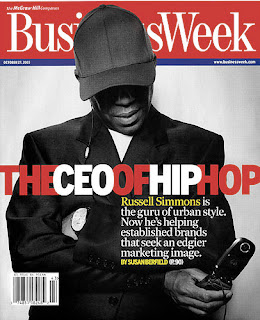 So went the most recent stop of the "Get Your Money Right" tour, a two-hour gathering that brought rap stars, TV personalities and financial experts together for a talk on personal finance.

The overriding themes: Work hard, believe in yourself, watch out for those credit cards and think about your future before you buy pricey stuff.

"You don't need a lot of toys to impress people," said Russell Simmons, co-chairman of the Hip-Hop Summit Action Network, which ran the event.

Simmons knows a thing or two about making money. He sold his stake in Def Jam Records for a reported $100 million in 1999 and is the chairman and CEO of Rush Communications, an entertainment, fashion and marketing conglomerate.

He brought along hip-hop stars to share their experiences and advice with young people who often leave college with loads of credit-card and student-loan debt. They got lessons on FICO, a type of credit score, and the advantages of buying a home.

The artists also talked about taking responsibility with money, getting rid of debt and saving now to spend later.

"Everybody wants to make it rain, but they never have something saved up for a rainy day," said Lil' Mo, a singer and songwriter.

Jones, a rapper and businessman, told the laughing crowd, "I buy the hottest cars that come out."

Folks with more modest incomes should probably just buy something that gets them to and from work, he advised.

Singer Anthony Hamilton sheepishly admitted that he'd already been to the mall Saturday, returning with "sparkly Nikes that I purchased — on sale!"

"Them shoes you see in the windows are not as important as that light bill you've got to pay next month," Rocsi, co-host of the Black Entertainment Television show "106 & Park," told the women in the audience.

Hip-hop has been criticized for glorifying sex, violence and expensive cars and jewelry, and the audience expressed some of those concerns during a question-and-answer session. But Simmons said demand drives what the industry produces and mentioned several stars who give back through charitable foundations.

"They're good examples of what you can do when you put your head down and go to work," he said.

That didn't convince Jessica Turley, an A&T junior who called some of the comments hypocritical. The industry could put out more wholesome images if it chose to, she suggested.

"If they really wanted us to see it, they'd push for it to be seen," she said.

I find this to be highly hypocritical. They are saying they have the best cars, shoes, etc., and it's too bad that their listeners can't buy those things. They promote the products in their videos even though they know their target audience can't afford to buy those things and will go into debt to be like them. That's exploitation!

You are mixed up here. Dreams are wish satisfaction, which implies on the off chance that you can set out to complete some try to understand your wish, nothing is outlandish. In such manner, you can give an idea to individual engine advances. auto title loans online in fresno

However, the moneylenders may make a legitimate move against them, on the off chance that they neglect to reimburse the advances. Then again, this is the pretty much the main choice to look for occupants. Cash Advance Chicago