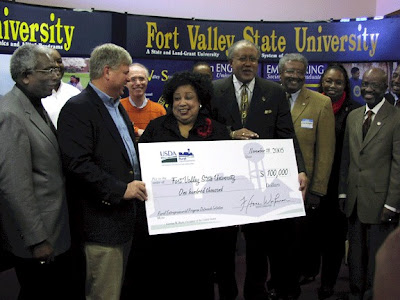 The long list of academic programs shutting down at Fort Valley State University may seem like a death sentence for the, but it's actually part of the school's plans for a revival.

Fort Valley has emerged from a $2.5 million budget deficit by shuttering 12 programs and revamping the remaining offerings.

The university is boosting its once plummeting enrollment by hundreds with an expansive recruitment program, posh new apartment-style dorms and promises of a bright future.

"Some folks told me they had put Fort Valley on life support, that it was on its way to withering up," said President Larry E. Rivers, a Fort Valley State graduate who took charge 18 months ago. "It's a new day in the valley."

Fort Valley, like many other public historically black colleges, is still recovering from the deep imprint racial politics left on the nation's higher education system, said Michael Lomax, president of the United Negro College Fund and former chairman of the Fulton County Commission.

After years of living in the shadow of their majority white counterparts, historically black institutions are working aggressively to draw students, he said.

"What integration did ... was it gave our students an opportunity to be selective," said Dwayne Ashley, president and CEO of the Thurgood Marshall College Fund, which provides support for public historically black colleges.

Fort Valley's enrollment had declined for nearly a decade. It hit 2,100 in the fall of 2006 after the state suspended accreditation for the university's teacher education program, sending 300 students in search somewhere else to get a degree.

For eight consecutive years, the university had received a low rating from the state on audits of financial records, in part because the financial aid department liberally bestowed tuition waivers, helping swell the deficit.

After Rivers took the helm in March 2006 he went on a speaking tour, expanded the recruitment program and sent his students to high school across the state to talk about their institution.

The university began airing monthly TV shows on a local station to talk about programs and projects on campus.

Rivers eliminated the campus' deficit by closing low enrollment programs, including programs in physics and office administration, and by laying off 15 employees and not filling vacancies left by retirements. He closed most of the university's teacher education degree programs and is opening new ones to regain accreditation.

The university - which began as a trade school for blacks - is focusing on its teacher education, health science and agriculture programs, said Daniel Wims, vice president for academic affairs.

Rivers had a 3,000 pound bronze statue of the university's mascot - a wildcat - placed in a commons area between academic buildings. The statue, students say, is the symbol of a new type of energy on campus.

"It seems like it's getting better every year," said Jasmine Wilson, 18, a freshman from Columbus, Ga., who said attending Fort Valley State is a tradition in her family.

To reach out to students, Rivers put his profile on online social networking sites Facebook and MySpace. Like many faculty and staff members at Fort Valley State, he makes sure students know they can e-mail or call him any time.

It's that nurturing and family-like atmosphere that minority students often cite as the reason they continue to choose historically black institutions like Fort Valley over majority white campuses.

"I went to other college campuses but I didn't get that home feeling like I did at Fort Valley," said freshman Darrell Lockhart Jr. "I was talking to my friends that went to other campuses. They feel alone. They say they don't know anybody."

Anticipating an enrollment spike this fall, the university opened a $44 million, 951-bed housing complex, financed by the private Fort Valley State University Foundation. Every room was reserved in the first two weeks they were available.

Fort Valley saw the largest enrollment increase of any public college in the state this fall with a 17 percent jump to 2,500 students. Rivers says he wants to see that number increase to 15,000 over time.

Another 500-bed housing building will open next fall, and the university has plans for a $20 million science building and a new stadium.

Rivers wants to expand the university's offerings beyond its traditional teacher education and agriculture-based programs. He's eyeing a nursing and pharmacy program and would like to expand the veterinary technician program - the only accredited one in the state.

Students say they can feel the evolution.

On the off chance that you are considering purchasing an utilized auto then get as much data as you can by method for auto advance articles concentrating on utilized auto credits or unsecured obtaining. In the event that you have a superb FICO assessment and don't have to get a ton then you can get a credit without putting up anything as security. Cash Advance

The test when purchasing another auto with low FICO assessments is made a little less demanding when an initial installment is given as a feature of the buy bargain - or possibly that is what is frequently guaranteed. cash advance costa-mesa

Exchange Houses. Couchsurfing.com and 1sthomeexchange.com are two cases of sites that open up conceivable outcomes of exchanging your home with another crew. Homes beat inn spaces for solace and space, and you get the opportunity to encounter really living in a group as opposed to being an untouchable. cash advance loans