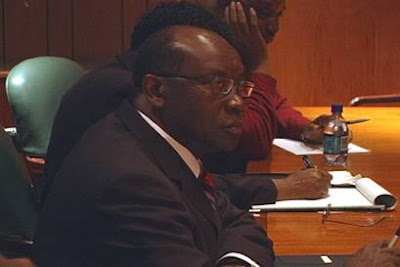 Acting on the motion of trustee Lumus Byrd, the board voted not to renew the contract of its ninth president, which expires in June 2008. The board also agreed to immediately place Hugine on administrative leave, with his last day scheduled to be Jan. 4, 2008.

Byrd said Hugine’s contract should not be renewed because of his performance evaluation and an academic review of the university conducted by the Education Commission of the States.

Hugine had been back by U. S. House Majority Whip James Clyburn who said, "Hugine is someone I hold in high regard. Even so, if I felt for a minute that he was not keeping faith with the institution, I would tell him so, but that is not the case."

Trustee Col. John Bowden said that he would tender his resignation on that same day if the board accepted Byrd’s motion. Board Vice Chairman Jonathan Pinson, Charles Williams and Bowden voted against the motion.
Posted by da rattler at 12:07 AM

Some individuals go in a bus transport each and every day on the off chance that they go to work or some different resorts. All through Fort Lauderdale, transport wounds come to pass in the avenues. This methodology as a rule comes to fruition when autobus organization entrepreneurs don't practice their own one of a kind commitments to keep their own cars efficiency.payday loans corona

Yes, every one of this is valid, yet there is still an approach to understand that advance for the business you are needing to purchase. Yes, the times of getting a 100% advances are a distant memory unless obviously you are working with private speculators, yet we are discussing a budgetary foundations today so I will stay concentrated on such in like manner. payday loans