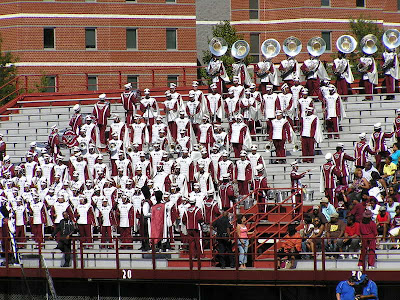 With its biggest performance of the year fast approaching, N.C. Central University's marching band has been crippled by the theft of at least two dozen instruments.

Now, with the high-profile, annual Battle of the Bands showcase set to start Jan. 26 in Atlanta, Reid is trying to patch his band back together. The loss of sousaphones, in particular, is a blow to a 180-member band that relies heavily on the large brass instruments. There are 16 sousaphone players in the band.

"I really don't know what we're going to do," Reid said. "It's kind of like driving a four-wheel car with three wheels. You won't go very far. It's like heavy metal with no lead guitar."

Along with the sousaphones, thieves took trumpets, trombones, flutes and piccolos, some of which police have already recovered from area pawnshops, Reid said. NCCU police detectives could not be reached Tuesday, and Reid said he doesn't know how thieves accessed the locked band rooms at least twice.

The sousaphones and some of the other instruments are university property, but some of the smaller ones were owned by students, said Reid, who spent part of Tuesday on the phone trying to find instruments to borrow for the coming band showcase. The stolen sousaphones are valued at $3,000 each; buying them new could run as much as $7,000, Reid said.

Sousaphones are large big-belled tubas that wrap around the body. They are most often purchased by schools, music groups and churches, but there is also a market for individual instruments, particularly on the Internet, said John Simonetti, who works at The Tuba Exchange, a tuba sales and repair shop in Durham.

Still, unloading 14 stolen sousaphones may not be easy, Simonetti said.

"It's not like stealing a television or stereo or something everyone has in their household," he said.

The Battle of the Bands showcase will be held at Atlanta's Georgia Dome. It is a popular event for historically black colleges and universities. NCCU's band is one of 10 invited to the event this year, and one of two from North Carolina; Winston-Salem State University will also be represented.

Reid said Tuesday that his band still plans to perform at the showcase. The band's booster club and alumni base will travel to Atlanta as well, said Norma Petway, NCCU's director of alumni relations. The booster club has raised money in the past for band uniforms and may be called on now to raise money for new instruments, she said.

"There is a sense of pride [in the band]," she said. "When it's time to get band uniforms, the alums get together. They're very loyal."
Posted by da rattler at 12:01 AM

To put it plainly, it is conceivable to profit your auto advance gave you have gotten your work done well, and have arranged well ahead of time for the credit office. It is essential to locate the right sort of moneylender, who may offer you precisely what you need, and offer you some assistance with deciding the way in which you longing to benefit your advance. Numerous such banks are accessible. cash advance