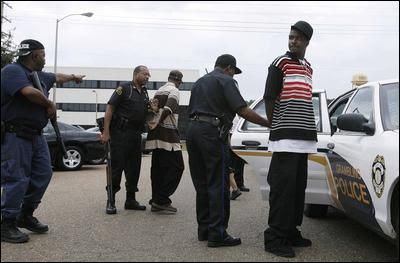 An all too familiar scene occurred at Grambling State University last Friday as the the campus was locked down at 3:30 p.m. following two fights and three gunshots being reportedly fired into the air. No one was injured, a GSU official reported.
Five people were originally taken into custody shortly after law enforcement officers from throughout the area arrived on campus.

Michael McKinley, Ph.D., executive assistant to GSU President Horace Judson, said the campus would remain in lockdown through the night and no one will be allowed on campus without proper identification.

Of the five arrested, two were issued summons for disturbing the peace by fighting.

"The three others were jailed — two for resisting arrest and disturbing the peace and the third for possession of marijuana with intent to distribute," McKinley said. He did not know the names of those arrested or if they were students.

McKinley said the fights began around 12:45 p.m. and law enforcement had things under control by 2:30 p.m.

Campus officials said during an afternoon news conference that the Firstcall Network that sends emergency text messages to students was activated at 2 p.m.

Natalia Stroman, a GSU senior, said she was on campus when she heard numerous gunshots fired earlier this morning.

She said some men got into a fight Thursday night at a local nightclub and again on campus Friday.

"From my understanding, the shooting wasn't at anyone, it was in the air," Stroman said. "It happened before the police got there."

As she talked from her cell phone around 3:45 p.m., screams could be heard coming from students as police herded them into dormitories for safety measures.

Other campus buildings were locked and students were forced outside.

Students said police in bulletproof vests were on campus armed with tear gas and K-9 Units.

"Everything just escalated and they shut campus down," Stroman said.
Posted by da rattler at 11:01 AM

Profiting terrible credit auto advance is not off point of confinement for you as you can get your auto fund through customary or online mode so borrower can appreciate the pool of sub prime banks who are had some expertise in managing the awful credit auto advances. Additionally these moneylenders offer better arrangement considering the borrower's monetary circumstance. Payday Loans Chicago

Installments fell behind as she juggled between bills, the IRS put a lien on her records for the 401K punishments, and one of the charge card organizations sent her to accumulations. Presently she had a past filled with late installments, a lien and accumulations on her credit. She committed one more error. Check Cashing Costa-mesa

Unknown said...
This comment has been removed by the author.
11:59 AM