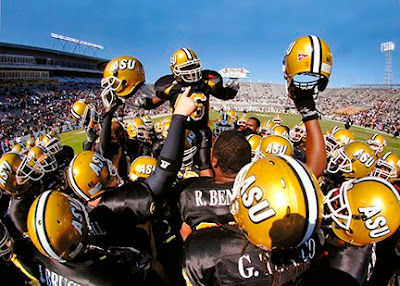 The NCAA has accused Alabama State University of 23 rules violations, alleging widespread use of ineligible players, grade changes and recruiting misdeeds and charging the school with lack of institutional control.

The NCAA's notice of allegations, obtained Wednesday by The Associated Press, gave the university until June 27 to respond and culminated a nearly five-year investigation.

The alleged violations occurred from 1999-2003 and most involved the football program, including the participation of 25 players who were ineligible because they hadn't completed the required percentage of coursework toward their degree.

The NCAA charged Alabama State with lack of institutional control, particularly within the football program, and said coaches, athletes, faculty and administrators were not properly educated on NCAA rules.

Head football coach L.C. Cole, who is charged in five of the allegations, was fired and the university self-reported a number of violations in August 2003.

The NCAA said Cole "failed to maintain an atmosphere of compliance in the program" and named him in five violations, including improper contact with two recruits at a restaurant and with the mother of another player who was at the University of Tennessee.

"I don't have any comment about it," said Cole, now coaching in the Canadian Football League. "I've moved on and whatever comes out of it comes out of it."

The names of student-athletes and prospects were redacted before the NCAA documents were released.

-The grades of eight football players were changed without the approval of faculty members and administrators.

-Alabama State coaches improperly provided meals, lodging and transportation to prospects and players. Prospects also attended a party at a student-athlete's apartment that included strippers, and were given money for tips.

The NCAA indicated that the Committee on Infractions will hear Alabama State's case during its Aug. 8-10 session. Thomas said the university would meet the June 27 deadline for a response.

"The aim of the university is to respond and cooperate as fully as possible with the NCAA," he said.

Pick minimal measure of term for this will lessen the financing cost of your advance. You should take a shot at your financial plan before you confer on the most extreme measure of installment. Then again, once you do this, you will have a decent credit standing. Future borrowings will be simple for you on the grounds that you don't have a terrible credit auto advance. Check Cashing

Acquiring an auto advance is not care for getting some bread at the nearby market. You can't simply keep running in, get a half-gallon of hard money, and run out. You have to examine your accounts and auto credit choices before you start the procedure of hunting down an advance. cash advance