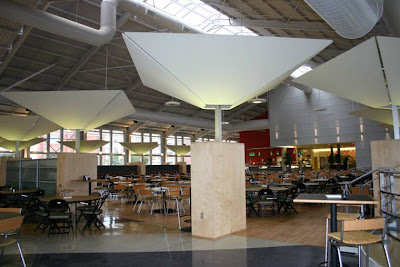 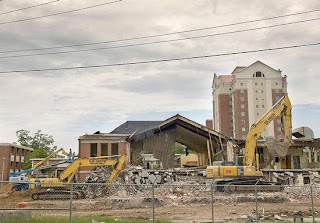 Alabama State University has about $172 million in debt -- enough that it is spending $11.5 million annually just to service it. It has the highest debt-per-student ratio in the state. And some students and administrators think that's a good thing.

The ASU board of trustees voted in late July, just weeks before school started, to increase tuition by 21.8 percent partially to help retire some of the debt.

But while ASU senior Kio shana LaCount may not like a tuition increase, she also didn't like sitting in classrooms with no air conditioning when temperatures climbed above 90 degrees outside. She remembers, as a freshman living in the dorms, moving her belongings up and down five flights of stairs because the elevator was not working.

Those memories are why LaCount believes renovations and building projects at the university are a "necessary evil" even though they have led to increased fees, tuition and room and board for students.

The debts that Alabama State University has accumulated in trying to build facilities to accommodate its student popula tion are also leading to in creased fees, tuition and room and board, said Freddie Gallot Jr., ASU's vice president for fi nance.

"The reason the university went out to the (bond) market to borrow this kind of money was to improve life on campus," Gallot said.

The renovations and building, which have included improvements to the student center, library, education building, dormitories and athletic fields on campus, are about the quality of life on campus, he said.

"In my opinion, this has been a wise investment for the university," Gallot said.

The university is in the midst of a massive building program that includes a $25 million student services center, a $27 million addition to the Levi Watkins Learning Center and a new $6 million Hornet football complex.

LaCount said it is frustrating to look at hundreds of dollars in charges on her bill from the university "for renovations of facilities we are never going to get to use" while she is a student. But, she said, the expansion is very important to the universi ty.

Gallot said, when using bonds to pay for building projects, the university pledges to repay the debt through "tuition and fees and room and board."

The almost 22 percent in crease in tuition ASU trustees passed on to students this summer "in part was the result of the debt service," Gallot said.

Ken Mullinax, director of public information at ASU, said the university does not have any plans in the near future to increase tuition again.

Before the latest tuition in crease, Gallot said ASU was one of the three most affordable of the 12 public universities in Alabama.

"The most recent increase changed that a little bit," he said.

The percentage increase looked high because tuition had been low, Gallot said, but he said ASU was still a good deal for those wanting an education.

About 80 to 85 percent of the students at Alabama State receive some form of financial aid, Gallot said.

Before university administrators look at moving forward with tuition and fee increases, he said they research whether the financial aid will cover the costs.

Stanley Giles, president of the Student Government Asso ciation at ASU, said he knows quite a few students are upset about the increase in tuition, but he said he has not spoken to anybody who was not able to re-enroll this fall.

"It is a concern of students, but I don't think it's hindered any students, to my knowledge, from actually getting their edu cation," said the senior market ing major from Little Rock, Ark.

The increased tuition has not led to a dramatic decrease in enrollment. The enrollment dropped from 5,695 students in the fall of 2008 to 5,554 students this fall, according to figures from the university.
Posted by da rattler at 7:22 AM

No doubt the physical plant of a school is important, and no one wants a school that can't even operate its air conditioning, but these issues are long-term strategic ones that were not dealt with by previous administrations, and things are so far in the hole that it is questionable whether or not it is feasible to deal with it now. Mind you many schools have large loads of deferred maintenance, but none so large for a college so small. Ala. State has enough debt to pay for 1/3 of South Carolina's backlog of maintenance across the WHOLE system. That's ridiculous.

Good brief and this post helped me alot in my college assignement. Thanks you as your information.

Hi I liked your information is very interesting ... these blogs about such interesting topics and I think I should love to offer more of these items as excellent ... thanks for the post

Hello, How do I get in touch with you? There is no email or contact info listed .. please advise .. thanks .. Mary. Please contact me maryregency at gmail dot com

The shopping so as to follow way you can spare cash is around and applying at a few banks for modest auto credits. I by and large suggest applying at around five better places that seem promising, and looking at both the interest rates they offer you, and perusing totally through the terms and conditions. Numerous individuals skirt this part, however perusing the terms can truly spare you cash, for example, there may be expenses or punishments you are ignorant of unless you read those terms. https://www.usapaydayloanstore.com/chicago

Some law understudies experience issues adjusting an every day existence with get ready for the exam. Some require some serious energy off after graduation and pay for costs utilizing an individual advance or a law oriented scrutinization arrangement credit. check cashing

You wouldn't need to stress over check process or other printed material by any means, subsequent to more often than not you can apply for combination effortlessly with the assistance of online assets you discovered before. Payday Loans

One intriguing outline in the report for the second quarter of 2009 spotlights on the rate of individuals who default again on their advances after an advance adjustment was made. These are individuals who had their credits adjusted and were confronting abandonment again in light of the fact that they didn't keep on making their changed installments. cash advance chula-vista

Like any type of solidification a private understudy credit combination is the point at which a borrower is permitted to join numerous private advances under one single private bank at another loan cost. Cash Advance

One awesome alternative to take a gander at is the Stafford credits, which are accessible to both undergrad and graduate understudies. Stafford advances are under the suspicion that an understudy doesn't have a FICO rating since he or she is coming straight from secondary school. Payday Loans

Obligation combination advances can truly differ in view of their loan costs and reimbursement terms. Many people who are searching for these sorts of advances don't ask the right inquiries they ought to - and that is a piece of what causes them issues. Payday Loans