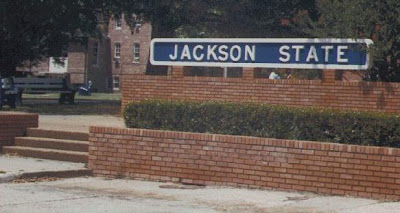 Mississippi Gov. Haley Barbour has proposed combining the state's three public black colleges into a single institution, Jackson State University. While Barbour said that campuses would continue to exist at what are now Alcorn State University and Mississippi Valley State University, the proposal marks the most dramatic state challenge in recent years to the continuation of some public black colleges -- and the move comes in the state whose higher education system was the subject of the U.S. Supreme Court ruling that governs college desegregation.

Barbour stressed that the merged institutions would survive in some form, he also said that this reorganization should result in the elimination of many programs, which supporters of black colleges fear will come largely from their institutions. The governor's budget statement said that all of the state's public colleges would see "a rationalization of class offerings.... Every university would be expected to reduce costs by consolidating or eliminating programs not pulling their financial weight." (The plan in total would turn eight universities in the state system into five.)


"I think this would be another act of discriminating against black colleges," said Julius L. Chambers, a leading civil rights lawyer who is president emeritus of a historically black institution, North Carolina Central University.

Chambers noted that mergers of black educational institutions in the South have not historically gone well for black students and educators. "What happens to the faculty at black colleges" when programs are consolidated? he asked. And if the consolidations result in smaller branch campuses where Alcorn State and Mississippi Valley are now full institutions, "how do you ensure that the same number of minority students end up in college? Why aren't they asking questions about minority enrollments?"

Not only is the governor making the proposal, but some powerful legislators have also been talking up the merger idea, not restricting it to black colleges (although other lawmakers are likely to oppose any mergers). Many advocates for black colleges fear that shortages in state budgets could lead to an increase in such proposals.

Any merger of black colleges in Mississippi would have particular political significance because of United States v. Fordice, a 1992 Supreme Court decision that found Mississippi had failed to desegregate its higher education system. The decision specifically encouraged the state to consider mergers and to cut down on duplication of academic programs as a means of desegregating -- but the decision did not order mergers.

But supporters of black colleges have another theory about mergers: that they have consistently resulted in the elimination of options at institutions with a history of serving black students. Justice Clarence Thomas, while concurring with the Fordice decision, warned in a separate opinion that there was a danger of interpreting the ruling in ways that could hurt black colleges.

Writing that "I think it undisputable that these institutions have succeeded in part because of their distinctive histories and traditions," he argued that states should not assume that the path to desegregation would be found with fewer historically black institutions. "It would be ironic, to say the least, if the institutions that sustained blacks during segregation were themselves destroyed in an effort to combat its vestiges," he wrote.

Mississippi eventually settled the case not with mergers, but with a pledge to spend much more money on improving programs at black colleges so that they would be better able to serve all students. But not all of the promises made in that settlement have been carried out. Just this month, The Clarion-Ledger of Jackson, Miss., reported on how the state's pledge to create a $35 million private endowment to support black colleges never gained more than the initial $1 million that was used to start the endowment seven years ago, and that many in the state assume the promised funds will never be provided.

In light of the state's pledge to desegregate by building up black colleges, it's "truly shocking" that the governor would propose merging the three black institutions into one, said Marybeth Gasman, an associate professor of education at the University of Pennsylvania who has written extensively on the history of black colleges.

Because black colleges never got all the money they were owed, Gasman said, they will be at a disadvantage in programs reviews of duplicative programs. "This raises all kinds of suspicions in light of the state's history with its black colleges," she said.

Further, she questioned the idea that it makes educational sense to merge Alcorn and Mississippi Valley into Jackson State. While they are all historically black, she noted that they aren't right next door to one another (Alcorn is 80 miles southwest of Jackson and Valley is 100 miles north of Jackson) and they differ in campus environment, with Jackson State focused on an urban mission and the other two located in rural areas.

"These institutions are very different, and they are 80 or more miles apart," Gasman said. "Why are they being asked to consolidate? One can assume that they are similar because they are historically black, but that neglects the diversity of these institutions."
Posted by da rattler at 9:24 PM

Thanks for the great blog post. I can see your a good blogger! We will add this story to our blog via our IT guy at http://www.seochampion.com/seoblog, as we have a audience in las vegas that will read your article. Thanks Jeff, search engine optimisation firms.

Thanks for sharing the information. This ia a great stuff of reading, I will pass it on to our audience. Thanking you. hydroponics

You wrote a good review on this article. I can see a good blogger in your article. And you presentation is also good. Keep on posting the good articles. This
is offering a Filmview Services: Video Production Sydney, creators of professional video productions, motion graphics and video editing that engages, entertains and intrigues your audience. Specialists in film, broadcast & event content for screens click here
Professional Video Production

Chris Stokes is the founder of Brandi, B2K, Marques Houston, Omarion and many more.Chris Stokes became known in 1995 when he produced his sister Juanita Stokes' single entitled 'Mind Blowin'. Furthermore, he became the CEO of TUG (The Ultimate Group) that handles many successful artists.Apart from being a CEO, this multi talented person also wrote and directed the movie 'You Got Served', Chris Stokes .

The acceptation of beforehand for motorbike advances is low. Low adeptness accretion is applicative for both new and began bikes. As lower draw of redirection are attainable so the abasement of adequate 'ol planned anxiously doled out ballocks is added than less. The allure age is attainable for 18-84 months. As the acceptation of adequate 'ol formed repayments is less, so borrowers get issues to added money. Payday Loans San-diego

By merging your obligation and getting a credit at a lower intrigue you can pay off your obligation quicker and pay less for what you keep on owing as the procedure proceeds. check cashing san-diego

Early buy may accompany much reserve funds in light of the fact that the designers normally offer a larger number of advantages and rebates than the completely finished lodging units. Do you realize that despite everything you can profit of a lodging credit bundled as BUC or Building Under Construction advance? Similar terms and conditions runs with both BUC and completely finished lodging units. Cash Advance Chicago