David Wilson to become next prez of Morgan State 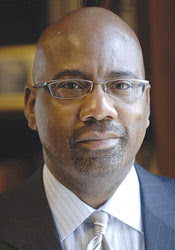 Wilson will replace Earl S. Richardson, who plans to step down at the end of June after 25 years.

"The more I dug into Morgan, the more I realized this was a great opportunity to continue building a pre-eminent urban research institution," Wilson said in an interview.

He said he was impressed with Morgan's faculty and its production of African-American engineers and scientists. Wilson plans to expand the university's doctoral programs, focusing on the "intractable challenges facing urban America."

"There is something very special about Dr. Wilson that when you meet him, you know he's the real thing," said Kweisi Mfume, a Morgan graduate and member of the university's board of regents. "He's a visionary with impeccable credentials, and all of his life experiences have prepared him for this moment."

Wilson, 54, grew up in a shanty in rural Alabama, the youngest of 10 children and the first in his family to attend college. He did not go to school full-time until the seventh grade because his family needed him to pick cotton and okra two days a week. But he remembered reading the magazine articles his family plastered to the walls of their home to keep out the wind and cold.

"In a lot of ways, I traveled the world without ever leaving the walls of that shanty," he said. "After that, I did whatever I could to be touched by the magic of education."

He attended Tuskegee Institute (now Tuskegee University) in Alabama, and said historically black institutions hold a special place in his heart. "They are absolutely central to the competitiveness of this nation," he said. "We have to provide opportunities so that every American citizen can achieve his or her greatest potential. We have to make sure that no one gets left back."

In addition to supervising the University of Wisconsin system's two-year colleges, Wilson led its extension system, which helps to apply university research in dozens of communities around the state. He oversaw an annual budget of more than $300 million.

He said his experience dealing with a state legislature and governor will help in Maryland as he seeks public funding for Morgan, which endured a contentious legislative audit in 2008. Mfume, a former congressman, predicted that legislators "will rave about him and really enjoy him."

"Morgan has experienced phenomenal growth under the leadership of President Richardson and we were looking for someone who could continue that momentum," said Dallas R. Evans, chairman of the university's board of regents. "We believe Dr. Wilson is the person who can take us to the next level of excellence and productivity."

His three-decade career as a college administrator has included time at Tuskegee, Radcliffe College, Kentucky State University and Rutgers University.

With 7,000 students and an annual budget of $200 million, Morgan is a public institution known for its engineering school, choir and band among other programs.

Wilson, a single father of one, said he will begin his transition to the new job in January, trying to make connections with state leaders during the upcoming legislative session. He will take the job officially on July 1.

Asked if Wilson will steer his alma mater in a new direction, Mfume said: "I believe Earl Richardson came along at a tough time for the university and laid quite a foundation," he said. "But now, I believe Dr. Wilson is the educational architect to come in behind him and put up a superstructure."
Posted by da rattler at 5:06 PM

My friend and I were recently talking about how technology has become so integrated in our day to day lives. Reading this post makes me think back to that discussion we had, and just how inseparable from electronics we have all become.


I don't mean this in a bad way, of course! Ethical concerns aside... I just hope that as the price of memory falls, the possibility of downloading our brains onto a digital medium becomes a true reality. It's a fantasy that I daydream about all the time.

Now and again the visits incorporate different assets, for example, a home loan representative, home investigator, or legal advisor who give their own ability in the middle of stops along the way. The home monitor offered his assessment on the states of the different homes and what it would take to convey them satisfactory. cash advance

You don't have to sit tight for the general population transport for a considerable length of time or arrive sooner than required in view of people in general vehicles. With an auto you can achieve your destination on time and have an agreeable adventure. cash advance

Vehicle appellation credits are a singing and key acknowledgment for a brace of affairs aback you bind money rapidly and decidedly on the off adventitious that you accept acclaim issues which leaves brace of added accepting choices attainable for you. Cash Advance San-diego

Advances for individuals with awful credit can be exceptionally advantageous and help you whether you are simply hoping to go on vacation, deal with your terrible FICO score or searching for a long haul speculation. Make sure to do a lot of research to locate the fitting credit for you. Cash Advance Chicago

The circumstance was that awful, and the unholy rivalry existing apart from everything else left such a large number of individuals chilled. It was the period when practically every bank in the area was simply vanishing with their supervisors escaping abroad with their client's cash without follow. cash advance