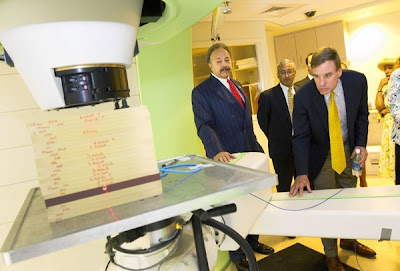 The new Hampton University Proton Therapy Institute doesn't open until next month, but already area leaders are lauding it as a jewel.

On a recent tour U.S. Sen. Mark Warner marveled at the treatment that will be offered at the 98,000 square foot, $225 million center.

The center piece of the building is a three-story 90-ton machine which will be used to precisely target and kill cancer cells.

Cynthia Keppel, the institute's scientific and technical director, showed them the main control room, where technicians will work to monitor the dose of the proton beam to cancer patients.

Typical treatments are given once a day for 39 days and take about 20 minutes each, she added. Actual radiation time is a minute.

HU has been awarded $9.4 million in federal funds for the center since 2008 for equipment, research and high-level staff, said Bill Thomas, associate vice president of governmental affairs.

In April, Gov. Bob McDonnell restored $510,000 in state aid for HU that was originally cut by state legislators. Restoring that amount for a full $1 million over two years honors the commonwealth's commitment to support the institute and the resulting economic benefit it brings to Hampton Roads, he said.

Warner applauded HU President William R. Harvey for his "audacity" to have the grand vision of creating the center. Seeing it go from idea to construction to patient treatment within six years is amazing, Warner said, adding that the institute adds one more jewel to the crown of HU.

The center is the first of its kind in Virginia and one of eight in the United States.
Posted by da rattler at 1:46 PM

The auto financing makes it workable for individuals to possess autos notwithstanding when they don't have the knot aggregate. In all financing case, the two gatherings, that is the bank and the buyer, must go to a concession to how the reimbursing will be directed. The vast majority of the agents or loan specialists don't make lives hard and will now and again be willing to think of tailor made reimbursement arrangements. Check Cashing