NC Central among the most popular in the nation 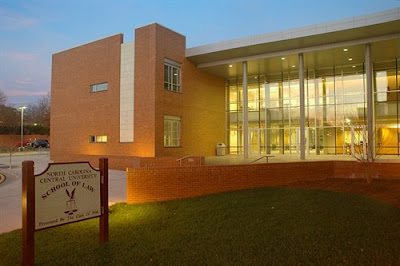 The law school at N.C. Central University, along with Yale and Harvard, has been selected as one of the nation's most popular law schools.

U.S. News & World Report ranks NCCU ninth on its new list, which is headed by Yale, followed by Brigham Young University and then Harvard. Central is the only North Carolina law school on the popular list.

The list is based on the percentage of students admitted to a particular school who actually choose to enroll there. For 2010, the NCCU law school had an admission yield of 49.6 percent. Of 415 applicants accepted by the school, 206 subsequently enrolled there. By comparison, around 80 percent of the applicants accepted by Yale chose to go there.

This isn't the first time the NCCU law school has been highly ranked.

It had previously been rated as the nation's best value for law schools for two years in a row by National Jurist Magazine.
Posted by da rattler at 11:11 AM

YOU CAN VIEW THE ARTICLE OF FREELANCE WRITER / WALTER WEBB
AS IT RELATES TO COMPANIES INVOLVED
IN LAW DISPUTES LIKE THE 2012 AT&T (T) AND T-MOBILE WHICH LED TO A DECISION NOT TO MERGER. AND THE FINANCIAL DIVORCE OF WENDY'S (WEN)
VERSES ARBY'S FASTFOOD RESTAURANTS
THAT LED TO A DIVORCE. WENDY'S HIDDEN AFFAIR WITH YUM BRANDS (YUM)
KENTUCKY FRIED CHICKEN QUITE POSSIBLY COULD HAVE HAD SOMETHING TO DO THE EVENTUAL BREAKUP. ALSO THE MERGER LAW OF PHARMACEUTICALS GIANT PFIZER (PFE) ACQUIRING RESEARCH TRIAL PHASE COMPANY ICAGEN OUT OF RESEARCH TRIANGLE PART, NORTH CAROLINA. THE M&A LAW
BLOG OF THE BROADCOM-EMULEX LITAGATION HAS GOTTEN INTERNATIONAL ATTENTION. SOME GLOBAL NEWS MEDIA BELIEVE A BRITISH COMPANY WAS INTERESTED IN EMULEX.
THESE AND OTHER TOPICS OF LAW WOULD BE DEBATABLE OF NORTH CAROLINA CENTRAL UNIVERSITY'S SCHOOL OF LAW, CHOOSING BY U.S. NEWS AND REPORT MAGAZINE AS ONE OF THE BEST LAW SCHOOLS FOR WORMEN. AND REITERATED AT A TIME IN WOMENS HISTORY MONTH BY THE MAGAZINE.

COMPANIES WHO SUPPORT THE SCHOOL OF LAW

MOUNTAIN VIEW, CALIFORNIA BASED SYMANTEC (SYMC) IS KNOWN AS ON THE TOP INTERNATIONAL SECURITY
SOFTWARE COMPANIES IN THE WORLD. PC, INTERNET, AND ENDPOINT SECURITY
ARE A FEW OF THE SOLUTIONS IT PROVIDES. KRATOS DEFENSE & SECURITY
(KTOS) BRING A MILITARY & CIVILIAN PRESENCE TO LAW ENFORCEMENT SECURITY. THE COMPANY PROVIDES MISSION SUPPORT SOLUTIONS
TO GOVERNMENT OFFICIALS FOR EVENTS
RELATED TO NATIONAL SECURITY, PENTAGON SECURITY, COMBAT SECURITY, AND INFORMATION TECHNOLOGY SECURITY. IF YOU PREFER THE COMBINE CIVILIAN AND MILITARY ARMED FORCES SECURITY LOOK AT MUTUAL FUND ISHARES US & DEFENSE (ITA). WITH HOLDING REPLETE WITH THE LAW MERGER OF UNITED TECHNOLIGIES (UTX) AND NORTH CAROLINA GOODRICH (GR) THE SUCCESSFUL AND AMICABLE LIGATION BRINGS ONE DOMINATE UNITED STATES SECURITY COMPANY. AND THE WORLD OF COAST GUARD LAW ENFORCEMENT TO SUPPORT SHIP BUILDING BLUE CHIP BUSINESS OF GENERAL DYNAMICS (GD).
STRYKER CORPORATION (SYK) OUT OF SUPREME COURT AND LAW ENFORCEMENT HISTORY MAKING KALAMAZOO, MI HAS BROUGHT LAW ENFORCEMENT AND MEDICAL
PRACTISES TOGETHER WHICH CAN BE VIEWED BY THE GLOBAL WORLD AS A UNIFIED UNITED STATES OF AMERICA.
IN THE WORLD OF NAFTA LAW JOINT RELATIONS OF COMPANIES LIKE LAW DEBENTURE CORPORATION PLC (LWDB.L) OF LONDON ABOUNDS WELL FOR LIGATION
OF UNITED STATES FINANCIAL MARKET IN VENTURING WITH LYODS BANK (LYG),CITIBANK (C), OR AMERICAN EXPRESS BANK (AXP) IN THE UNITED STATES.

Purchase Back Stock Early. Purchasing Back stock is one of the main tips you can do in the amusement that will immediately ensure you a higher score in light of the fact that it increments each metric you're evaluated on. Cash Advance Chicago