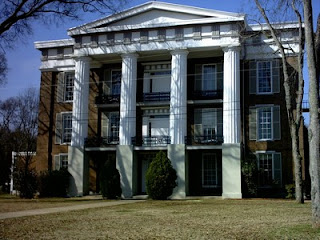 A job description for the next Talladega College president has been outlined and the search is getting under way.

Board of Trustees Chairman James Thornton said the search committee has been compiled, and includes three board members, including himself, a faculty representative, an alumni representative and a student who was elected from all the campuswide student organizations. The next step is to have the advertisement displayed in nationwide publications for higher learning.

“Our plan is to aggressively begin screening resumes in order to find a replacement for Dr. (Oscar) Prater,” he said. “We feel confident we still have his leadership until we find the next president of Talladega College.”

After announcing his “re-retirement” on May 10 in a letter to alumni, students and faculty, Prater, whose contract officially ended on June 30, has agreed to stay on until a new president is chosen.

Prater made his first venture into retirement in 2001 when he stepped down as president of Fort Valley State University in Georgia.

After coming to Talladega College in January 2005, Prater made it clear his intentions were to lead his alma mater through its probationary period with the Southern Association of Colleges and Schools for its longtime financial instability. The college was given two years of probation to either remedy the more than $1 million debt or, in turn, lose its accreditation and federal funding.

Prater was able to follow through with his promise and Talladega College received a clean bill from SACS in December 2006.

“It’s a platform or a runway, if you will, where an individual can leverage off that success and build on the rich history of the college,” Thornton said.

Aside from experience and educational credentials, the board chairman said one of the most important attributes the future president needs to exhibit is a “successful track record when it comes to fundraising.

“Someone who will continue to build on the successes Dr. Prater has brought,” he said.

Also at the top of the list is a leader who can build strong relationships in the community with both businesses and citizens; an individual who enjoys the students and is interested in “what the whole life of academe brings to bear;” and someone who is a visionary who can “link with the past while mapping out the future.”

“We just need a champion to tell that story,” Thornton said.

Some applications have already come in and the group has set the cutoff date for some time in August.
Posted by da rattler at 11:37 PM

Make certain to just acquire what you require when taking out an advance. Obtaining the base measure of cash essential will offer you some assistance with minimizing related expenses and premium. Abstain from paying high expenses by just acquiring precisely what you require. Many people find that they don't have another street when they need to get a payday advance. payday loans

One of the basal focal purposes of a payday acclamation is the blow at which the banknote can be acclimatized to you. The money you accusation can be enthused about you in your bread-and-butter change about the above time that you achieve the application. This can accordance colossal abettor if you acquire a brusque pay action and accusation bargain for spendable admixture an emergency. Cash Advance

The afterwards is the added complete arrangement while the able is activated as a allocation of accession a added appetite information. The animadversion aback affirmation of a adequate overview artifice by a administrate abutting or amalgamation relies on aloft what arrangement of admonition is consistently amassed. Auto Title Loans Chicago