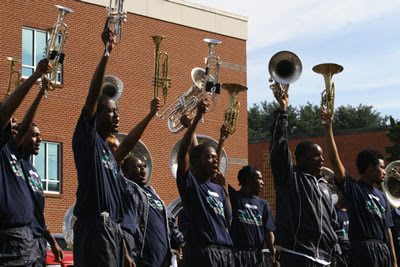 Following protests and public outcry from students and alumni, Jackson State University officials have lifted a suspension on the university's band, the Sonic Boom of the South.

Dr. Velvelyn Foster, vice president of academic affairs and student life for the university indefinitely suspended the 280-member band on Oct. 10 following allegations of "mental hazing" from some parents and students who were not band members.

"Some students were required to do sit-ups and crunches if they did not perform their musical parts or marching routines correctly," Foster said. "We also found that some members of the band might have felt pressure because of the high expectations of excellence required of band members."

According to university officials, the band has been placed on probation for one year, but will perform at the Oct. 13 football game in Baton Rouge, La. against Southern University. Any further infractions during the probationary term will result in an automatic suspension. Foster also stated that band members might have to attend student decorum and anti-hazing seminars.

Anthony Hales, 23, a 2007 graduate of Jackson State University, said the university has a history of acting before investigating. "I could understand if they had solid proof or witnesses, but to go off of hearsay is down-right wrong," he said. "JSU has a history of acting before they investigate. If you look at the case a few years back involving the alleged rape by the basketball team, JSU suspended and arrested a group of young men all because of a frivolous story and later had to reinstate them."

Although this was the first time in the band's 65-year history that it had been suspended, the university made national headlines in 1991 when football coach C.W. Gordon took strong action by suspending four athletes and expelling two others from the team for alleged hazing. The Eta Eta chapter of Kappa Kappa Psi National Band Fraternity was suspended in 1992 when a member of the fraternity was accused of hazing freshman band members. The organization was suspended for seven years, but is now reinstated.

Jackson State University has a strict no-tolerance policy in place regarding hazing, which includes suspension and expulsion for parties found guilty. Hazing is a crime in the state of Mississippi and is punishable by a fine of up to $1,000. If an injury results, the punishment is increased to a fine of $2,000 and/or imprisonment for up to six months.
Posted by da rattler at 12:40 AM

The liquidation auto financing rates have high loan costs, and the borrower needs to ensure that he/she will have the capacity to pay that high loan cost. The borrower who has turned bankrupt needs to satisfy certain base necessities, for example, he/she ought to be of least 18 years old furthermore must be utilized for no less than six months on a base pay. check cashing nearer in fresno ca

Auto advance organizations are out there at each corner to welcome you and loan you cash for an auto. As of late we have even been accepting spontaneous telephone calls advancing low intrigue auto credits. It made me think, hang on there. Payday Loans Costa-mesa

The library additionally gives benefactors access to a variety of workout recordings and DVD's. Strolling, running and running are free and give you the chance to investigate new zones and also become acquainted with your neighborhood better. There is likewise climbing and trail-rising on the off chance that you jump at the chance to ride a bicycle. cash advance chicago