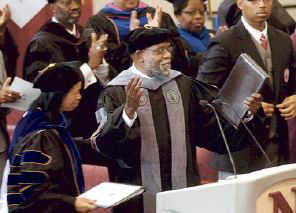 He wants students to amp up their academic expectations considerably. He wants faculty and staff to call people back when they leave a message.

And everyone should pick up litter, lest they become too accustomed to living and working on a sloppy campus.

These were among the demands Charlie Nelms laid out for the NCCU community during his first universitywide address; they come from his initial observations after two months as the institution's new leader.

In a 25-minute address, Nelms said he wants NCCU to become the top liberal arts college in the Southeast -- a lofty goal for an institution struggling to retain students. Nelms' arrival has coincided with a new push by the UNC system to improve retention and graduation rates at the state's public universities. Nelms told students Friday that he expects all students who enroll to graduate.

"Unless you have graduation as your destination, you shouldn't be here," Nelms said. "We're deceiving ourselves if we settle for less than that."

Nelms spent a good deal of time Friday talking about customer service -- the very basic answering of phones and returning of messages that students expect but don't always get. Everyone on campus, he said, needs a "new attitude" in terms of service and courtesy.

"If you get a call from a student, return the call to the student," he said, eliciting one of the largest rounds of applause all morning.

To that end, all NCCU employees -- starting with administrators -- will undergo service training provided by the university's human resources department, Nelms announced.

Nelms also has apparently been frustrated by litter on campus. He challenged everyone who lives or works on campus to adopt the block around their dorm or place of work, a commitment to help clean things up.

"We won't leave newspapers on the floors of our classroom just because you didn't put it there," he said. "Appearance does matter."

That particular lesson may take time to sink in. As the McLendon-McDougald Gymnasium emptied after Nelms' address, attendees left plenty of convocation programs -- and a few soda bottles and the like -- scattered on chairs or on the ground.
Posted by da rattler at 3:50 AM

Purchasing an auto is a wonderful and energizing background too. Auto fund is not an issue you get it effectively nowadays. Who doesn't prefer to be the ruler of streets? Without a doubt everybody does! There are shrouded dreams in each body. usapaydayloanstore.com/chicago

You will become acquainted with about the auto's title records, protection, rescue records and mishap history. Ensure that the vehicle has a spotless title and no bank credit on it. check cashing places

Before hopping and petitioning for chapter 11, ensure you have investigated every single other choice. In a money related emergency insolvency might appear like a simple arrangement, however there are distinct options for take a gander at. payday loans

In the event that you right now owe on an advance for the buy of your unique cruiser, then you might need to consider offering in secretly as this is going to permit you to take full advantage of your bicycle. That way you can pay off any sum that despite everything you owe. In the event that you can put cash down on the new machine, you might be offered a markdown for doing as such. payday loans

In any case, likewise you should get the bank to support the advance home loan that you are going to get out for the house, so regardless of the possibility that you do have enough for the store of the house, you won't have the capacity to get the house on the off chance that you can't get the credit. Be that as it may, accepting you had enough for the store, and you got affirmed for the advance, you are in a decent position to profit with your speculation. Cash Advance San-diego