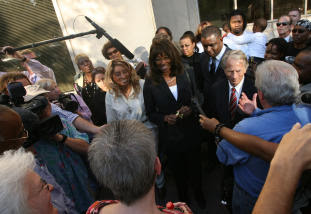 The jury ended up split 6 to 6, but stood united Friday and said they cried and prayed while deliberating the fate of ousted TSU President Priscilla Slade before declaring they were hopelessly deadlocked — resulting in a mistrial.

"They just didn't get to the heart of the case," foreman Charles Schweppe said of the prosecution's case, which accused the former Texas Southern University leader of using school money for her personal benefit.

State District Judge Brock Thomas declared a mistrial in the eight-week trial after jurors for the fourth time in three days informed him they were deadlocked.

Prosecutors say they plan to retry Slade. Defense attorneys preferred an acquittal, but said the hung jury was a blessing.

Slade, 56, was charged with misapplication of fiduciary property of more than $200,000. Prosecutors said she spent more than $500,000 of TSU money on a lavish lifestyle.

During the trial, jurors heard testimony about some of the purchases, including tens of thousands in furniture, $40,000 in fine china, crystal stemware and silverware settings for 25, and $100,000 in bar tabs over six years at Scott Gertner's Skybar and Grille.

After staring at each other across the room for almost two months, Slade and the jurors met face to face on the courthouse steps afterward and wished each other well.

"Good luck to you," Schweppe said.

"She did a lot of good things for the university; unfortunately, she did some bad. They need someone like her so they can get the right things done," Schweppe said.

Facing a bank of television cameras, Slade thanked DeGeurin and her supporters.

"We knew from the beginning that the truth would set us free," Slade said. "I am just grateful that God truly answers prayers."

DeGeurin spoke glowingly of the jurors and his client while backhanding prosecutors.

He said he had hoped for a total not-guilty verdict, but that he talked to jurors and six were convinced of his client's innocence.
Posted by da rattler at 12:01 AM

I just wanted to leave a quick comment to thank you for your post! I really like your blog site!!! Would you mind terribly if I put up a backlink from my site to your site? Keep up the great work! :) Cheers, medical insurance attorney new jersey

Presently, don't sit tight for anything and complete your employment at this moment and soon, you would have the capacity to see the cash credited into your record under the ideal alternative of advances for inhabitants, which is offered in unsecured way. cash advance costa-mesa

Profit automobile advances after chapter 11, as the credit procedure has gotten to be basic and exhaustive. The advances offer new rent of plan to the advance borrowers who are in a vile circumstance as they have lost their credit and it is additionally not up and coming in the event that they will have the capacity to return to track promptly. car title loans in fresno

The proprietor may have paid everything except the last two portions before he got stranded in completing it off. What the bank will do is to set the store cost of the repossessed cruiser at a quality that essentially covers this equalization. This ends up being incredibly low. check cashing san-diego