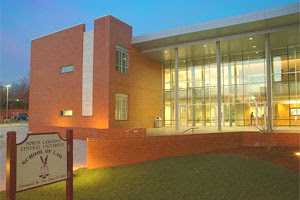 John G. Roberts Jr., chief justice of the United States, visited N.C. Central University's law school today. The chief justice largely avoided the limelight and the camera. Roberts spent most of his time not before a crowd but with small groups of students and lawyers. His schedule was tightly controlled, and the media - aside from one campus newspaper reporter - was barred.

For NCCU students, the visit was a rare opportunity. Roberts was on campus to preside over the school's moot court competition.

Roberts, who joined the nation's high court as its chief justice in 2005, visits just a handful of law schools each year. Two years ago,NCCU Law Dean Raymond Pierce met him at a judicial conference in West Virginia and asked him to speak at NCCU.

Roberts told Pierce that he doesn't usually give speeches but he'd preside over a moot court competition - in which teams of law students argue a case on appeal to a panel of judges.

Roberts will met with students, presided over the competition and held a U.S. Supreme Court Bar swearing-in ceremony for about 20 NCCU law alums, said Pierce, who doled out most of the 120 seats in the NCCU courtroom to students through a lottery, leaving plenty of alums and professors alike disappointed.

Roberts visits about six or seven law schools a year, often to preside over moot court competitions and occasionally for other reasons, Arberg said.

Roberts' visit is a coup for this small but well-regarded law school stuck between Duke and UNC-Chapel Hill, two institutions with law schools boasting larger reach and profile. Duke has hosted U.S. Supreme Court justices at least a handful of times, and two chief justices have spoken on campus, William Rehnquist in 2002 and Earl Warren in 1963.

NCCU has hosted just one in its history, associate justice Potter Stewart in 1980.

If the six NCCU students chosen for the moot court competition never argue a case before the U.S. Supreme Court during their careers, they can at least say they took legal fire from the nation's chief justice. Roberts was joined on the panel by Allyson Duncan, a former NCCU law professor who sits on the 4th Circuit Court of Appeals, and Henry Frye, a former member of the North Carolina Supreme Court.

Dominique Williams, a third-year law student, is one of NCCU's six participants in a case involving whether the government should be allowed to medicate a man in order for him to be considered competent and able to stand trial.

"We all have put in long nights and endless days," he said. "It's a great honor, so we've prepared very hard to make the university proud."

Bryan Nye was a second-year law student at the University of Kansas last year when Roberts presided over his moot court competition there.

Nye was wound pretty tight until he attended a question-and-answer session with Roberts before the competition. Seeing Roberts in person, joking and approachable, put him at ease.

"If you get to hear him speak, you'll realize he's brilliant, but also, he's very personable," Nye recounted recently by phone from his home in Kansas. "He's not out to get you as a law student."
Posted by da rattler at 6:41 PM