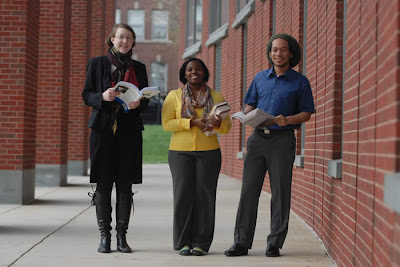 Three Howard University seniors will head to Jamaica, Germany and Thailand next fall as recipients of the 2009 Fulbright Scholarship.

Justin P. Dunnavant (B.A. candidate, History and Anthropology, ‘09), Florence Maher (B.A. candidate, Political Science and Economics, ‘09) and Kelly McCray (B.A. candidate, English and Greek, ‘09) have received the coveted award. The trio brings the number of Howard University Fulbright scholars since 1998 to 22. The awards are for one year of study and/or research that can be pursued in more than 140 countries.

“The selection of these outstanding College of Arts and Sciences students as Fulbright Scholars is an indication of the high quality of a Howard University education, the effectiveness of faculty mentoring, and the enhanced strategic emphasis that President Sidney A. Ribeau is placing on global learning and internationalization,” said Alvin Thornton, Ph.D., Interim Provost and Chief Academic Officer.

Dunnavant will travel to Jamaica to research African cultural retentions through archaeological data, with a goal of expanding understanding of the African experience in the Americas. Maher is headed to Germany and will explore social integration on the German-Polish border. McCray will spend a year teaching in Thailand as part of the English Teaching Assistantship program.

Hamilton Cunningham was recently named a 2009 Truman Scholar. Cunningham is Howard University’s sixth Truman Scholar since 1989. Cunningham, an economics major in the College of Arts and Sciences (COAS), plans to pursue a Masters of Arts in Art Policy and Administration. He is one of only 60 students from 55 colleges and universities across the nation selected for this honor. More than 600 candidates were nominated for the award by 289 colleges and universities. The prestigious Truman Scholarship provides up to $30,000 for graduate study. It is awarded annually to students who have excelled academically and are committed to careers in public service.
Posted by da rattler at 12:40 AM

We have a few college students online from college of Colorado College and we love your blog postings, so well add your rss or news feed for them, Thanks and please post us and leave a comment back and well link to you.Thanks Jen , Blog Manager
Howard University

Since the scope is so scanty on these shoddy strategies, you will wind up paying out for a wide range of things in the event that you need to guarantee. At last, it will arrive up costing you much more than you would ever have envisioned. Payday Loans Costa-mesa