Tn State set to recast itself as a research U. 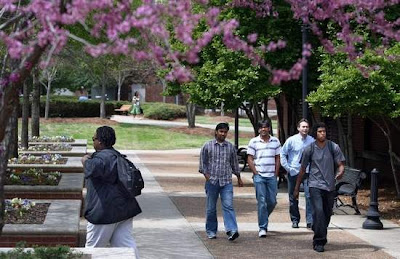 Over the next six years, Tennessee State University plans to spend more than $36 million on a strategy it hopes will transform the university into a top research school.

TSU's plan is ambitious: to transform itself into a premier research institution, one that attracts thousands of new students and millions of dollars in endowments, donations and grants. At a time when universities across the state are cutting budgets, http://www.tnstate.edu/">Tennessee State University is dreaming big — and ready to throw millions into its plans.

Over the next six years, TSU plans to spend more than $36 million on a strategy it hopes will transform the university.
TSU's plan is ambitious: to transform itself into a premier research institution, one that attracts thousands of new students and millions of dollars in endowments, donations and grants.

The question now is whether a university that's been plagued with lackluster student service, declining enrollment and bad publicity can turn things around in the middle of the worst budget crisis to hit higher education in decades.

"If we choose to do nothing, then we will be nowhere" five years from now, he said.

The plan calls for TSU to increase enrollment from 8,200 to more than 12,000 by 2015, increase fundraising revenue by 10 percent every year, and to earn a designation as a level two research institution from the Carnegie Foundation.

What those flagship research programs will be, Nwosu couldn't say for sure. But TSU is the only land grant college in Middle Tennessee, so its college of agriculture is a likely candidate, as is its nursing program.

Recent state budget cuts forced TSU to trim $9 million from its budget. Paying for the $36 million plan will mean shifting millions from other programs, including the federal Title III money it receives as a designated historically black university. Nwosu said TSU will divert money away from under-performing programs and also will hope increased fundraising will provide some of the planning money.

"These are bad times, but bad times don't mean we'll just fold up the tent," Nwosu said. While painful, he said, this year's budget cuts gave the university a chance to take a hard look at its entrenched practices and programs: "We're rethinking, reorganizing and reinventing."

The most ambitious parts of the plan may take years to happen, if they happen at all. Nwosu pointed out that many goals are interlinked: You can't expect enrollment to rise until you've improved student services. You can't improve student services without launching the staff development plans. You can't work on staff development without a budget, and for that you need to get your fundraising operation off the ground.

But students may see some changes right away. Nwosu said TSU's Web site will change to suit the Web-surfing habits of its computer-savvy students. The school is pushing to go paperless, putting publications online in a move that saves not only trees but also money.

Every six months, the planning committee will come together to report on how its efforts are progressing. The final version of the strategic plan should be complete within the next month.

The Tennessee Board of Regents will review TSU's plan, along with the rest of the five-year plans its schools will submit, this summer.
Posted by da rattler at 12:13 AM

With regards to an online utilized auto credit you should understand that there are a wide range of loan specialists to browse. At the point when shopping on the web for car fund you will have the choice to run with one of the numerous extensive banks or money related organizations who can now give you an online utilized auto advance, or you will likewise have the decision to run with a non-bank loan specialist. auto title loans fresno online

Car credit mini-computer let you ascertain the sum your vehicle will be esteemed after certain year. This will offer you some assistance with making judgment on when to offer your auto. By the assistance of number cruncher will have the capacity to choose the best time that will offer approach to great parity. Payday Loans Chicago

Next, you ought to take a gander at the advances that you have taken out. You ought to set aside a sure measure of cash to reimburse such advances or obligations all the time. The cash that you will have spared from diminishing your costs can be occupied to this reason. cash advance costa-mesa