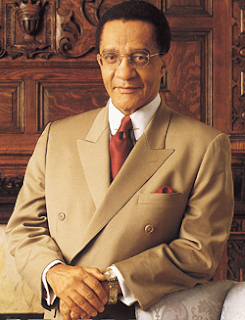 Tony Brown, the76-year-old former host of the PBS show, "Tony Brown's Journal" announced his departure as dean of the Hampton University's School of Journalism. Brown had served as dean for five years.

After all the diplomas were handed out, Brown read an excerpt from his book "What Mamma Taught Me: The Seven Core Values of Life," shared advice with the graduates, then told the crowd of about 500 he was resigning.

"He said he just wants people to understand that he's not upset about leaving," said broadcast journalism graduate Courtney Snead. "That it's just a next step in his life, just like the one we're taking."

Brown became the first dean of the Scripps Howard School of Journalism and Communications in 2004, and the department's third leader in three years.

Christopher Campbell resigned as director in July 2004 over differences with President William Harvey about allowing students to have free speech and press freedom in their reporting.

Charlotte Grimes, the previous chair of the journalism program, cited similar conflicts about freedom of speech when she left in 2002.

The following year, HU administrators confiscated an issue of the independently-run student newspaper, the Hampton Script, after disagreeing with the placement of a letter by the acting HU president JoAnn Haysbert.

"When he arrived, the School of Journalism and Communications was in a state of disarray," Harvey said in a statement Tuesday.

"Not only has he smoothed out the rough patches, but he has taken it to new heights. His intellect, experience, judgment, and presence will be sorely missed," he said.

Brown's exit came as no surprise to students. He had been dropping hints since January that it was his last academic year, said rising journalism sophomore Juan Diasgranados.

The broadcast major said Brown told students in his 6 a.m. grammar club it would be their last time meeting, and in late April, told his journalism practicum class "On May 10 as the seniors graduate, I'll be graduating as well."

Brown said, via HU Spokeswoman Alison Phillips, that he plans to continue speaking nationally, to complete his fourth book and to remain active promoting the need for English fluency.

Phillips said Brown will continue to serve as dean until June 30, and a replacement has not yet been selected.
Posted by da rattler at 11:49 PM

I am a 2005 graduate of the program, and have kept up with the progress of the program. I am proud of the accomplishments the J-School has made since then, and appreciate the efforts that Dean Brown made to put the school on the map, esp. with the controversy that surrounded the program in the 2-3 years prior.

Dean Brown has done a great job at Hampton's J-school, and it is unfortunate that he has to step down. I hope that his replacement can continue in the path that Dean Brown has set. HBCU's have problems with good leadership, and I know the importance of a productive Journalism school. Hampton's journalism school ahs come a long way, and I hope the legacy can continue. HBCU's produce excellent students with proper leadership their is no limit to their accomplisments in the work field.