VA to issue $150 million in bonds for Hampton U. 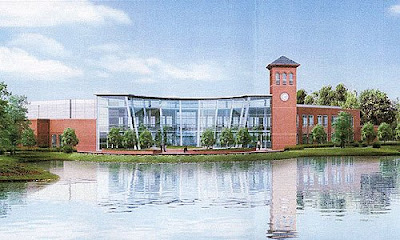 Kaine's actions clears the way for the way for the construction of the $225 million center which will support the proton beam treatment, research and educational facility.

Hampton U. must pay the bonds back and pay the state for the transaction, so the money is not a donation, said center spokeswoman Sarita Scott.

The bonds will be issued through the Virginia Small Business Financing Authority. The group has already issued $70 million in bonds for the proton institute in December, bringing the total Hampton has bonded to $220 million.

Kaine said in a statement that the center "will be a tremendous asset for the Commonwealth, and I am very pleased we found a way to support it's important work."

HU officials said the center will begin seeing patients in August 2010 and expect to treat more than 2,000 per year, with 65 percent dedicated prostate cancer patients.
Posted by da rattler at 4:39 PM

Conventional moneylenders like banks, insurance agencies and Wall Street speculation houses are all profoundly controlled. Banks convey FDIC or other government protection, insurance agencies are viewed over by every State Insurance Commission and Wall Street is represented by the Securities and Exchange Commission (SEC) and the Financial Industry Regulatory Authority (FIRA). payday loans

The administration will give an expense credit adding up to $8,000 to American first-time mortgage holders who might meet all requirements for this lodging advance. payday loans san-diego