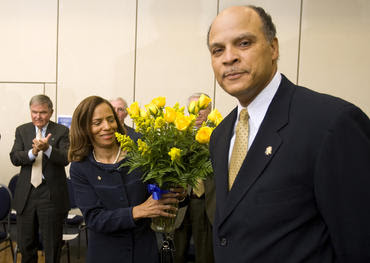 N.C. A&T didn't have to search very far to find its new chancellor, as Harold Martin, vice president for academic affairs at the UNC System office was selected as the new head Aggie last Friday morning. Martin is an A&T alum, and former chancellor of Winston-Salem State University from 2000-2006.

“It is a great pleasure to come home,” Martin told a crowd assembled at the UNC Board of Governors meeting held on A&T’s campus.

The Board of Governors unanimously approved Martin, who President Erskine Bowles called “a mentor, a colleague and a friend.”

“This is a huge personal loss for me,” said Bowles, who has leaned on Martin as his “But I understand why he missed this campus and felt called home, home to serve his alma mater.”

Bowles said he could not imagine a better man to lead A&T.

“Harold Martin is a proud Aggie,” Bowles said. “He personifies Aggie pride. He is not only a graduate of A&T - he has also been a faculty member, dean and provost at A&T he knows this institution inside and out. He is of North Carolina A&T.”

Many Aggies said they trusted Martin with the school’s future, citing his work at WSSU. While chancellor there Martin saw the school’s average incoming SAT score go up more than 70 points and doubled enrollment.

Martin said he plans to do the same at A&T, picking up on the progress of outgoing chancellor Stanley Battle, who resigned in February citing family and personal reasons.

“I want to say publicly that I thank Chancellor Battle and his staff for the progress that was made under his leadership,” Martin said.
Posted by da rattler at 6:50 PM