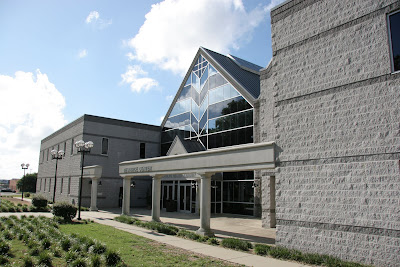 Dr. Frank Royal, the hospital foundation board's chairman, described the donation as a "transfer of love, commitment and a little money" during a ceremonial check presentation at the school yesterday.

Virginia Union acting President Claude G. Perkins said the gift is the largest ever to the school from an African-American organization.

"Many students like Dr. Royal and others have gone and made significant contributions in our city and throughout this land," Perkins said. "We hope to use these funds to continue that legacy. As you know we are facing difficult economic times. Many of our students, their parents have lost their jobs. Many of our students are overextended with student loans."

Virginia Union, in the North Side of Richmond, is a private, historically black university founded in 1865.

The school, in a new partnership with Bon Secours Richmond Health System, will create an internship program for students, possibly in health-care management and the sciences, said Dougal Hewitt, senior vice president for mission services at Bon Secours and a member of the Richmond Community Hospital Foundation board. To qualify, students must be residents of the Greater Richmond area for at least a year.

Hewitt said the internships could include training opportunities at Bon Secours Richmond hospitals -- St. Mary's, St. Francis, Memorial Regional and Richmond Community. Richmond Community became part of the Bon Secours system in the mid-1990s. The hospital foundation was created with proceeds from that sale.

Richmond Community Hospital is in the East End but was previously in a building on the Virginia Union campus. That building now sits empty and boarded up.

Royal, a physician who has practiced more than four decades, described walking into the building for the first time years ago.

"It was the first time in my life I had ever been in the front door of a hospital," Royal said. Racist attitudes relegated African-Americans to enter through back doors. Black doctors could practice only at certain hospitals.


I don't mean this in a bad way, of course! Societal concerns aside... I just hope that as the price of memory falls, the possibility of copying our memories onto a digital medium becomes a true reality. It's a fantasy that I daydream about almost every day.

Genial post and this fill someone in on helped me alot in my college assignement. Thank you as your information.

Well I acquiesce in but I about the list inform should prepare more info then it has.

High financing costs and short-advance terms can send an understudy into a pit of budgetary tumult and put their vehicle at danger. Battling researchers are as of now attempting to make sense of how to pay for books, nourishment, and the standard school life stimulation. Getting strapped into an immoderate advance will just make it harder for them to see their way through to the end of instructive passage. Payday Loans

Being an understudy it turns out to be truly difficult to think of cash when there is some need. Educational cost charge, Meals, gas, mobile phone and numerous more sorts of costs are there. Understudy's credits are the genuine help in that kind of circumstances. Cash Advance San-diego

For the normal understudy who has moved on from school, it's a troublesome accomplishment attempting to make the installments on the greater part of the government understudy credits. Surely, they were important to secure a decent instruction and to acquire the training important to secure position in the occupation you had always wanted. www.usacheckcashingstore.com/san-diego